You are here: Home / Children and Young Adult Books / The Terrible, Terrible Lake by Adam Archer 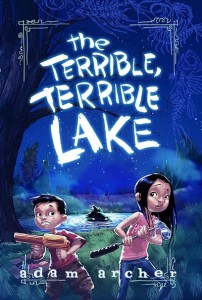 The Williams family thought that leaving the big city for small town New England life would be good. A relaxing change of pace. They were wrong. For on their new property was Lake Nok Barr. At first its ancient waters seemed calm and still. That is, until its inhabitants started to crawl out.

What Inspired You to Write Your Book?
I write and draw comics for a living and love it but wasn’t able to do what I wanted story-wise with the medium. An illustrated novel allows me to tell a more in depth story, with more dialogue, yet still have plenty of pictures to show characters expressions, settings etc.

How Did You Come up With Your Characters?
I wanted to set a young adult horror-comedy where I grew up, in New England. After a few weeks of sketching characters (both human and monster 🙂 I had my cast and began to layout the book.

The rain sounded like marbles hitting the Explorers roof as it headed North on I-95. Frank Williams griped the wheel while the wind toyed with his truck, tossing it back and forth between the lanes. A “Welcome to New Hampshire” sign flashed past on the right, and then disappeared into the darkness.
Frank’s thirteen-year-old daughter Shell sat nervously in the back seat. Her fingernails dug into her father’s headrest like eagle talon’s into a fish. She looked out the windshield with an expression so terrified it bordered on comedy. She straightened it immediately however when she caught a glimpse of herself in the rearview mirror. Can’t give my brother such easy material for jokes, she thought, he has to work for it.
Sammy, the youngest Williams at eight-years-old, was completely oblivious to his surroundings. He snored so loudly (while taking up too much of the backseat) that at times, he managed to even drown out the storm.
Kitchen sinks are falling from the sky and slamming into our roof, Shell thought, but somehow my brothers snoring is louder. Figures.
She looked up and wondered if rain could dent the roof of a car. A mental image of the metal pealing open and the trucks cab filling with water popped into her head. Great idea Shell, nice timing for creepy thoughts. Why not go for the gold and imagine a feral hog attacking us in the back seat too. She smiled and looked at Sammy, still sleeping. Well… another feral hog.
A quick swerve brought her attention back to the road.
“Oops, sorry about that,” her dad said, “pothole. I don’t want to jinx things, but you guys have been doing pretty well back there. I know long drives and close quarters can get rough.” He leaned over the steering wheel and squinted.
“Nah, it’s nothing compared to you driving the whole way. Can you still see okay, Dad?” Shell hoped it was a dumb question.
“Yup, I can see fine thanks. Of all the days for a monsoon to hit, huh?”
“No kidding,” she answered. “This weather’s ridiculous. And it had to be on moving day, right?”
“Yeah, that’s called Murpy’s Law.”
“I hate Murphy.”
“Everybody does.”
Shell tried chatting with her dad as much as she could during the drive, whether she felt like it or not. She knew it couldn’t be easy sitting behind the wheel for so many hours and wanted to do her part to keep her dad entertained. Her brother on the other hand wasn’t going to offer much by way of conversation, she knew that. His contribution was either snoring that was so ridiculous it sounded fake, or fart jokes whenever he managed consciousness…

About the Author:
Adam writes and draws for a living and has worked on comics such as Batman, Ratchet and Clank, the Teenage Mutant Ninja Turtles, and Scribblenauts. He has also worked with the toy company Cepia LLC on their Dagedar, and Zhu Zhu Pets line.
His second novel The Bones of Lampus Haddly is available on Amazon with preview.

Links to Purchase eBooks
Link To Buy The Terrible, Terrible Lake On Amazon