You are here: Home / Fiction / Action & Adventure / THE SOUND OF CRYING by Nigel Cooper 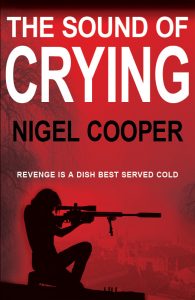 THE SOUND OF CRYING

John and Helen Kramer are an average married couple living in rural Cambridgeshire, until their four-year-old twins, Edward and Jamie, are kidnapped and brutally murdered. Just when it seems that the Kramers can see retribution in court, the killer’s lawyer leaves the judge with no choice but to throw the case out due to two technicalities and a cluster of police procedural errors. The final nail in the Kramer boys’ coffins is the fact that their killer is a local priest.

John Kramer tries desperately to move forward with his life, but his wife, Helen, cannot, not until she avenges the deaths of her beloved boys.

DS Rhodes of Cambridgeshire CID soon discovers that this is not a regular kidnapping/murder case and all is not what it appears to be.

Helen Kramer has dropped off the grid and is nowhere to be found and the priest is as free as a bird, and alive, but for how long?

What ensues is a deadly game of cat and mouse between Helen Kramer, the police and the priest. Can DS Rhodes unravel the truth and find Helen Kramer before she unleashes her own special brand of punishment on her boys’ killer?

Could you forgive the man who killed your children?

“A shockingly realistic story that will get you thinking”

What Inspired You to Write Your Book?
I was inspired to write this book after reading about a local woman who's young girl was kidnapped and brutally murdered. I felt compelled to write a novel about a kidnapping case where the mother would seek revenge on the man responsible.

How Did You Come up With Your Characters?
Like with all my fiction, coming up with characters is a job in itself, especially character names, which have to be fitting what the type of character i.e. having a hard villain called 'Pinky' would not be fitting. I also write up character biographies and character profiles in depth. I often dream about the characters in my books, I have researched them and know them that well. You have to know your characters as well as you know your own family members, you have to make them 'real'.

Book Sample
‘I’m here to give myself up.’
The police enquiry desk officer looked up to see a Roman Catholic priest standing before him in full clergy dress, his blood-soaked hands held up in mock surrender. He was soaked in blood from head to toe – literally. He looked like he’d been in the middle of some sort of bloody carnage. It was in his hair, all over his face. His white plastic clerical collar was splattered with crimson and although his long cassock was black, it too was obviously soaked in fresh blood.
‘Jesus Christ,’ said the enquiry officer, shocked by what stood before him. Although the man covering the enquiry office wore a standard issue white police shirt complete with blue epaulettes, he was simply a civilian, hired to staff the enquiry office out front, nothing more.
‘No, I’m afraid I don’t quite have that status, I only wish I did. However, I am a priest. My name is Derek Stanton, Father Derek Stanton. I believe you’ve been looking for me,’ he said in a calm matter-of-fact gentlemanly, if slightly creepy, tone.
‘I’m sorry?’ said the enquiry officer.
‘Over the past twelve months?’
‘Ok, you’re going to have to give me a little more information, Father,’ he said, not quite having the experience nor the expertise to deal with the blood-soaked clergyman.
‘Jamie and Edward Kramer – the four-year-old twins – ring any bells?’ he said, raising an eyebrow.
The penny dropped. ‘Dear god,’ said the civvy, seriously shocked.
‘I’ve been saying that a lot recently, but somehow it doesn’t seem to have worked. I don’t think he’s really listening to me anymore; come to think of it, I’m not sure he ever did,’ said Father Stanton.
‘You mentioned the Kramer twins, what do you know about them?’ said the enquiry officer, looking him up and down, blood and all, desperately trying to assess the situation and getting ideas above his station that he could actually handle it.
‘Well now, let me see, ah yes, I took them exactly one year ago today and approximately, hmmm,’ he said, pausing to look at his wristwatch, ‘40 minutes ago … I killed them both in cold blood … just over a mile from here, actually,’ he said, looking up at the enquiry officer. ‘You know what the amazing thing is? I’ve just walked across the city, past all the tourists, students and happy shoppers looking like this,’ he said, gesturing to his blood splattered face and blood soaked clergy attire, ‘and all I got were a few questioning glances, but basically nobody really gave a shit.’
The enquiry officer was too shocked to speak and the magnitude of the situation suddenly sank in. He took a moment to compose himself. Father Stanton could practically hear the cogs turning in the enquiry officer’s head so he decided to throw another spanner into the workings of his mind. ‘You really don’t want to know what happened between my kidnapping them a year ago and their brutal slaying 40 minutes ago. But, if your morbid fascination does get the better of you, you could always watch the countless hours of the home video footage – I recorded everything you see.’
‘Ok, stay right there, don’t move,’ said the enquiry officer, as he decided, about bloody time, that he could not handle this horror alone and needed help. He dashed out of the office and along the corridor to the custody suite to find a custody sergeant or two who could come and help him deal with the situation out front.

Buy THE SOUND OF CRYING On Amazon