You are here: Home / Fiction / Mystery/Suspense / The Rental by M.J. Moore 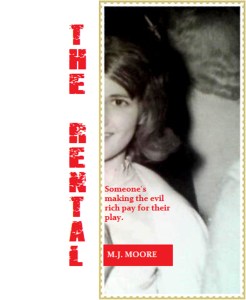 Cole Jensen is a hack who makes good money writing bad books about women – until another hack comes along and usurps him, and he finds himself bankrupt and homeless. He is taken in and given a job by Constance Morrell, an icily beautiful woman who feels she owes him a favour.

Now home is a pool house at the bottom of the garden of a mansion in the Hollywood hills. There are many perks to his new living situation, but there are also drawbacks, not the least of which is being expected to entertain the odd, sinister women Constance invites to her nightly soirees.

Cole’s disturbing encounters with these women give him the inspiration to begin work on the novel he’s always wanted to write – a social satire on the nocturnal activities of the rich and bored – but with the party games getting darker and the guest list dropping by the day, Cole must decide whether artistic integrity is really worth dying for.

A Neo Noir novel with an Exploitation twist.

Targeted Age Group:: Adult/sixteen and over

What Inspired You to Write Your Book?
I had hit a wall with the novel I was writing, and desperately needed a distraction, so I turned on the TV and ended up watching The Black Dahlia. Soon after, I began devouring the works of authors like James Ellroy, Jim Thompson and Raymond Chandler, among others, and got to work on a noir story of my own. I was also inspired by a documentary I saw on horror/thriller exploitation cinema.

How Did You Come up With Your Characters?
They are all amalgams of characters from classic noir cinema and famous people. I was mindful, however, that while the story should contain the classic noir tropes, the characters themselves shouldn’t be clichés, and should be very much part of the modern age.

Book Sample
From chapter 3:
The stalag-like structure of the school seemed to work, for a while, but then a new cook arrived. Dale North was himself a former graduate of the corrective school system, who one day surprised even the lawyer who got him tried for manslaughter as a juvenile by suddenly showing a talent for cooking. This, and his conversion to Catholicism saw him released onto the streets the day after his eighteenth birthday, but rather than take up the generous position the state had lined up for him – short order cook at a diner in east L.A. – he requested that he be allowed to give back to the system that had given so much to him, by nourishing the bellies and souls of the lost and forgotten.

His real motivation was finding an accomplice with whom to embark upon a cross-country journey of discovery of the kind only a select type of person would ever willingly agree to. He knew he had found that person in Jennifer Finch when she smiled at him over her macaroni. The day of the dining hall massacre was one Jennifer always marked out on her calendar in the years following Dale’s death; their first and only anniversary.

A scream tore through the thick, enforced silence of the dining hall when Martha Foster, a bear of a girl whom Jennifer befriended for protection – largely from Martha herself – began vomiting blood. The girl sitting next to Martha went from screamer to gurgler when she suffered the same fate, and before long every person in the room – from the inmates to the governess herself – was either dead or in the throws. Jennifer just so happened to be on kitchen duty that day, and was up to her elbows in potato peelings when Dale came rushing in with the head cook’s blood all over him.

He swept Jennifer up into his arms and whirled her around.

‘You’re a genius, that’s what you are, a goddamn, ever-lovin’ genius!’

He set her down again, and Jennifer took off her apron. She took his hand and pointed it to the delivery hatch, and the two of them made their escape before the guards knew either of them were missing. They drove to Mexico, were married in Cancun, and consummated their union on the bar of a Cantina, surrounded by the bullet-ridden bodies of eighteen locals, only seven of whom were truly deserving of such a death.

About the Author:
I have been writing horror stories and watching horror movies since before I was old enough to do either, (although I’m admittedly a bit of a pussy where the latter is concerned). The first horror novel I ever read was Pet Sematary, and Stephen King is still a major influence of mine, along with Clive Barker and Jeffrey Eugenedes. I was born and still live in Melbourne, Australia with my son Griff and my anti-social Shi Tzu, Pepi Le Pew.

Links to Purchase eBooks
Link To Buy The Rental On Amazon