You are here: Home / Fiction / Action & Adventure / The Mayonnaise Affair by Frank Linn 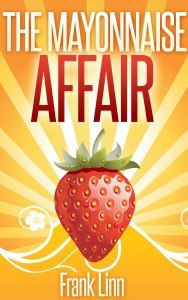 Life was perfect for Ron Ramsey. But he wanted more. Dating the most beautiful woman in the world and living a life of well-earned luxury were not enough for Ron. With the help of Strawberry, a plus size prostitute in South Florida, Ron is able to carry out an act that is unplanned, inexpiable, unconventional, and yes with mayonnaise.

The Mayonnaise Affair is a short story – Not for the prudish or those with a small appetite.

What Inspired You to Write Your Book?
I was reading a news article about a police officer who was doing something rather naughty. There was a mayonnaise commercial on the television. I put the two items together and voila.

How Did You Come up With Your Characters?
For the main character, Ron, I wanted someone who most people would admire. He is self made. He came from very humble beginnings and worked his entire life to get to where he is when the story begins. Not only is he a hard worker, he also gives back. He dedicates his time and money to charities, and not in a superficial way. He is supposed to be the perfect person – or as near perfect as someone could be.

Strawberry was created to be outrageous. She is an obese prostitute who wrestles alligators by day.

Book Sample
Ron Ramsey had never called a prostitute before. Why would he? He had never needed to. He had never thought to. His girlfriend had just been ranked the hottest woman on the planet by several different magazines. However, he had just hung the phone up with Strawberry. She came recommended by the only friend that Ron had who wasn’t on the up-and-up.

Ron began to pace around his living room, anticipating Strawberry’s arrival. He wasn’t unsettled by the decision he had made to call Strawberry, just anxious for what was in store. A meeting that may leave his relationship, reputation, and himself tarnished.

Ronald Ramsey’s alarm went off at the same time each day. He, however, was always up one minute before his five am scheduled wake up time. At 4:59 am every morning, Ron would get up and, with the enthusiasm of a child going to Disney World for the first time, throw himself on the floor and stretch. After limbering up on this particular day, he made his way to the kitchen. He began to brew himself two cups of coffee.

Ron lived in a penthouse condominium on Miami Beach. He was a world renowned personal trainer, who had made millions on self-help books. His client list included the who’s who of the rich and famous. His hourly rates, which started in the thousands, were set by the laws of supply and demand. There always seemed to be someone willing to pay more.

He didn’t really care about the money though. He simply believed in fitness and that helping others was a good thing; the money was truly a happy accident for him. The Ronald Ramsey Foundation led several successful campaigns to help reduce childhood obesity rates in South Florida. His initiative was an unyielding success. Obesity rates in South Florida public schools had dropped by half over the three years that Ron sought to tackle the issue.

Ron himself had grown up in poverty. His mother and he had been on their own; he never knew his father. She worked as a maid in two Houston Hotels to make ends meet. One was nice in downtown, the other was off the interstate in a less savory part of the city. The latter was closer to their home. Ron’s first pair of new shoes came in high school when his high school gym teacher discovered that Ron had a knack for football (quarterback, nonetheless) and purchased them for him. It was the first decent break Ron and his mom received.

Ron was able to go onto college on a full ride athletic scholarship. His school won two national championships during his tenure as starting quarterback, which was for all four years of his college career. While in school, he majored in business, mainly entrepreneurship. He knew he didn’t want to play football after college.

He put his degree to work and opened a gym a year after he graduated. He had been approached to write a memoir of his time at college. Ron thought it was weird having a twenty-two-year-old write a memoir, but he did it anyway. He gave all the proceeds of the book to his mother, who for the first time, at the age of forty, had a car. She also retired from being a maid.

His mother’s parents came and saw her for the first time since she told them she was pregnant at 17. They said they wanted to make amends; in the process, they asked for money. Ron saw through their façade of love. He didn’t let his mother get hurt again. She left Houston. His mother eventually fell in love and moved to Atlanta.

About the Author:
Frank Linn is a short story writer who was born and raised in Florida.

Frank graduated from the University of Florida at the age of 20 with a degree in Political Science. When Frank isn’t working his “desk job,” he is at his other desk working on short stories as the best catharsis for life. He likes sunshine and sarcasm.