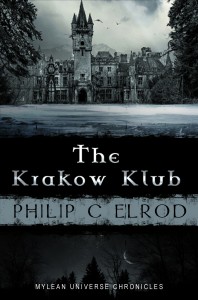 We go about our daily lives, innocently believing that all is well and that our government will protect us, but, what if there are unseen, dark forces poised to destroy our nation?

The United States government is in grave peril but few people are aware of the danger that threatens the entire nation. An evil cabal, the Krakow Klub, has already taken over the governments of several small nations and, now, all is in place for their most important and decisive step toward world domination. Billions of dollars have already been spent to infiltrate Congress and the military. The President will be assassinated and that will lead to violence that will paralyze the nation. Soon, it will all be over and America will no longer be a free country, unless, someone can foil their well laid plans.

That man is John Scott and he has knowledge and powers that set him apart from all other Earthlings. In fact, he is only half Earthling and his powers stem from his Mylean heritage.

The planet Mylea was home to a very advanced civilization with technologies exceeding our wildest imaginations. John Scott now holds those powers and has access to unbelievable technologies and a master computer named Maxx. Together, they forge a plan that could save America.

The Krakow Klub is poised for the final coup. They have already murdered those who stand in their way and the lives of many others are in imminent danger. John will face almost insurmountable obstacles and dangers; but, he has Maxx, that most powerful of computers, and a few trusted associates. Together, they will attempt to do the impossible, to save the world from total domination by the Krakow Klub.

What Inspired You to Write Your Book?
I have always enjoyed Science Fiction and the possibility of advanced civilizations somewhere out there in the Universe. I used my imagination to create a situation in which a dangerous political situation in our world must be addressed by outside powers.

How Did You Come up With Your Characters?
My characters are the product of my vivid imagination. I like to personalize them with strengths and flaws. In addition, I enjoy creating characters who play off each other or contrast with each other to make the story more interesting.

Book Sample
In a remote castle, north of Krakow, Poland
It was early December 1991. They arrived one by one. Strangers, but yet known to each other. After depositing their coats with the servants, they were shown to the elaborate study. The walls covered in ancient molded paneling were dark and lent a gloomy pall to the atmosphere. A large round table of mahogany was centered in the room, surrounded by twelve leather chairs worn with age. A fire was crackling in the enormous hearth, sending shadows cavorting across the room as the cobwebs that draped the corners seemed to come alive.
As they each took their appointed seat, an icy hush seemed to fall over the world. At the center of the table were decanters of the finest liquors and liqueurs with crystal glasses, as well as a small array of canapés, including a large crystal bowl of caviar. After all, these were no ordinary strangers, but scions of business from around the world. Anything less would have been an insult.
Obligatory pleasantries were exchanged along with formal introductions. The mood was solemn, almost sinister, as the business at hand was brought forth. Plans were proposed, suggestions made, parameters set. The verbal exchanges were lively but carried a diabolical undertone that, if heard by outside ears, would send icy chills up the necks of even the bravest of men.
Their gathering lasted well into the night and continued early the next morning. In the middle of the afternoon of the second day, through a haze of cigar smoke, they regarded each other with looks of satisfaction. Their leader spoke in low but firm tones as he detailed the final plan. When finished, he looked at each member, and then said, “So, we are agreed?”
Each one in turn gave a brief nod. Though he never had any doubt they would, Number One was still gratified to know that he had chosen this group wisely, and their plan would proceed without question. Lifting his snifter of cognac, he proposed a toast, “To the world. Our world!”