You are here: Home / Fiction / Romance / The Greatest Gift by Marie Tayse 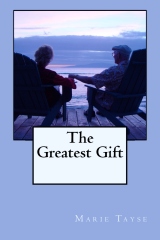 He has autism and she has never felt good enough. Together they set out on a daring adventure where they discover unconditional love in the most surprising of places.

What Inspired You to Write Your Book?
Watching how some people treated my friends and a family member with autism, inspired me to write this book. Some of the general public gawk and stare at those with autism, as though they are ‘less than’ the rest of us. I wanted to bring the reader into the life of someone with autism and show the world from their perspective. I hope to have made some think about their actions and words toward those with autism and other special needs.

How Did You Come up With Your Characters?
The main character was loosely based off a mixture of two friends of mine with autism. I took aspects and character traits from both of them and then added some. I came up with the other characters simply by focusing on traits that would either worsen or improve the lives of the two main characters. In a sense, the main female character was based somewhat off of me and some of the interactions I’ve had with people when they’ve disagreed with me having ‘different and unique’ friends. I’ve always believed in knowing someone before I make judgments about them, regardless of what you can see or initially think about them. Having autism and other special needs doesn’t change the fact that the person still has hopes and dreams; they cry. They eat, sleep, and love just like you and me. The diagnoses doesn’t change them from being a person; it just makes them unique when others try to be all the same.

Book Sample
It was still fairly the same as it had been then, visually-wise anyway. The feelings were very much different tonight though. He was proud of Candace and Daniel and he was excited for them. But being back here brought back so many memories of her.
He’d first laid eyes on her as she was walking home from school with friends. Normally he would have been at work, but his friend’s dad had asked him to drop by that afternoon to take a look at his car. Even back then, he’d been pretty handy with his hands. The year was 1945. He was seventeen years old and working to try to get his own car so he could get out of that dead end town.
He’d heard the giggling first, and then when he looked around the side of the car he saw her. She was pretty as a picture. Her sandy blonde hair was cut short and blew in the breeze. Her hazel eyes made him feel as though he would melt at any moment. She held her school books tucked in her arms and she shyly watched as he strolled over to her. He wiped his greasy hand off on his shirt and extended it. “Hello there, miss.” He told her. “The name’s Abe and what would your name be?”