You are here: Home / Children and Young Adult Books / The Goatman by Jeff Fuell 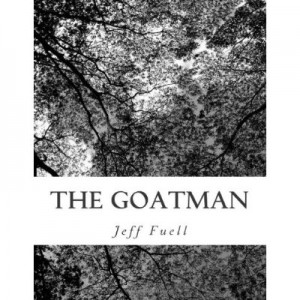 In the summer of 1983, a young teen named Danny Brent and his two best friends share good times and special moments while enjoying that unique magic of childhood, an all too brief time when anything seemed possible. They also share a chilling adventure that bonds them together well into adulthood. Now, for the first time in almost thirty years, Danny is sharing his secret about what really happened, the story about his brief encounter with the Goatman – a legendary creature that exists on the outskirts of town in a haunted area called Goatman’s, how he saved his life, and what happens afterwards. From the author: “The Goatman” is very much inspired by Stephen King’s “The Body,” which was then made into the brilliant film “Stand By Me.” I wanted to capture the essence of what it was like to be a young boy and growing up, spending time with your best friends, a magical time when every day was an adventure and anything seemed possible.

What Inspired You to Write Your Book?
I am a huge Stephen King fan, and one of my favorite novellas of his is “The Body,” which was made into the great film “Stand By Me.” I wanted to write something in that vein, something that would not only be great story but also capture the magic of being a kid again.

How Did You Come up With Your Characters?
The book is written in first person so in a very real way the main character is me. Also, the places mentioned in the book are also real, including Goatman’s, which was located just outside of Corpus Christi, TX. The other characters are purely my imagination.

Book Sample
Gordon bent toward me with his giant hands open and I closed my eyes.
Then I heard some frantic wrestling of the weeds.
“Auuuugggggghhhhhhiiiiiiiiieeeeeeeeeeeeeee!”
The scream was so blood-curdling and so laced with pain and agony, I almost thought that…well, I didn’t know what to think because I had never heard anything like it in my entire life. I’m glad that I hadn’t because it was the kind of scream that could penetrate a person’s senses and haunt them for years to come.
I opened my eyes and looked up.
At first, I didn’t know what I was looking at, and I had to keep myself from blinking because my mind was telling me to shut my eyes, but I was willing them to stay open because I could not tear them away from what was in front of me.
Something had Gordon.
He was fighting to get out of the grip of something that was even bigger than he was, and I saw that his feet were dangling off the ground. I quickly tried to think of something that could lift a guy who looked to be at least two hundred and twenty pounds like he was nothing off the ground and nothing came to mind.
I looked at what was wrapped around Gordon.
Two monstrously muscled arms that looked to be covered with some kind of white fur were gripping him. Gordon was savagely trying to free himself from the arms and pounding on them, shaking his entire body, trying to get free, and the arms still held him steadfast. I saw them tighten around him, and in the silence of the night heard the sound of Gordon’s ribs snapping and popping and his agonizing screams as they did.
I was so frozen with fear and mesmerized with what was happening right in front of me, even if I had thought of getting up and running away, I don’t think I would have been able to do so.
My eyes looked upward, and I saw something that actually made me gasp.
Up above Gordon, I could see the head of whatever it was that was holding him and slowly squeezing him to death.
It was the giant head of a goat.
Even as I was seeing it, I couldn’t believe it. I know that it was dark outside with very little light, but it was a real head of a goat. There was no way a mask could be that realistic, I don’t care how many good make-up people live in Hollywood.
The goat’s head had a weird quality to it, as though it were…blended with something. That’s when I realized what it was – it was also the face of a human being because the dark eyes looked totally human. As monstrous as the face was, the eyes had a quality that could only be found in a human being. I don’t know if you would call it intelligence because he also had the look of a wild, savage animal, but there was definitely something human there. There was also a pair of giant, brown swirled horns on his head that curled at the tips, and it was only then that I smelled that familiar scent that I had smelled all through the day at certain places.
It dawned on me with alarming suddenness what I was looking at.
The Goatman.
He was real.
He was real, and he was standing right before me. Even more than that, he was saving me.
With a savage grunt, he pulled Gordon into the weeds and disappeared. Everything was silent for a moment.
Then, the weeds started rustling again in a torrent, and I heard more snapping of bones and Gordon’s screams. I knew with certainty that he was dying. A person could only make inhuman noises like that when they were being faced with imminent death and they could not do anything about it. It made me think of an image of someone who was literally being slowly pulled apart while every bone in his body was being crushed at the same time, and even that would not begin to really describe it.
Even after all the things that he had done and everything that he had put me through, I could not help but feel sorry for him, and I started crying as I heard what I knew were going to be his final screams.
Then there was silence. I lay there, afraid to get up, afraid to even move. I noticed that even the crickets were now quiet. It was the most utterly, completely silent moment of my life. I didn’t think it was possible for the world to be this quiet. I wondered if this was what an astronaut felt like when he was drifting in space and for a brief moment had a portion of the universe all to himself.
The weeds started to rustle again, and I kicked away not sure what to expect.