You are here: Home / Fiction / Historical / The Garden of Earthly Delights by Robert Dodds 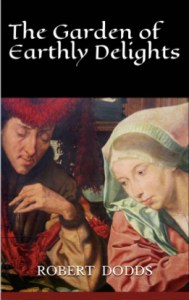 It is 1490. Northern Europe is in the grip of sweeping plagues and religious inquisitions, and in daily terror of the Day of Judgment. In the town of Den Bosch, the artist Jerome (Hieronymus Bosch) paints his visionary denunciation of sin and folly, ‘The Garden of Earthly Delights’, while his neglected wife Aleyt strays into sin herself. But Jerome is not immune from the world he portrays. A rival artist and a corrupt Abbess concoct a hellish plot that threatens to destroy him.

What Inspired You to Write Your Book?
I was inspired by a fascination with the extraordinary paintings of Hieronymus Bosch (1450-1516). I began to think about the kind of world he lived in, a world in which the authority of the Church was supreme and in which people were terrified of being damned to an eternity in Hell. Then I imagined what might happen to a man like Bosch who dared to defy the Church.

How Did You Come up With Your Characters?
Hieronymus Bosch is a historical figure, an extraordinary and bizarre artist of the late fifteenth century whose paintings caught my interest in my early teens. However, as is the case with Shakespeare, one has to deduce the details of his life from scarce sources. This gave me free rein to explore issues of the day through a fictionalised account. There are six main characters in the book – three men and three women. I have tried to get equally into the consciousness of each of them, and in particular was interested in creating a compelling female ‘villain’ to set against the innocent protagonist.

To the Master Painter Jerome van Aachen, known as Hieronymus, of Den Bosch:
The Cathedral Chapter of Overmaas sends you greetings and good tidings. From the seven submissions received for the design of our new window at the north transept of the cathedral, your depiction of the nativity of Our Lord Jesus Christ has been chosen. Our bursar will visit you next week with the primus payment to secure your services, and to agree a date for completion of the drawings and colour plan, to be no later than the end of mensis Januarius the Year of Our Lord Fourteen Hundred and Ninety One. The assembly and installation of the window is to be completed by Easter of Fourteen Hundred and Ninety Two, and your supervisory services during the period of making and installation will be secured by a separate stipend to be agreed after the design work is accepted.
Benedictio Dei,
Sigismond,
Amanuensis to the Cathedral Chapter of Overmaas

Link To Buy The Garden of Earthly Delights On Amazon