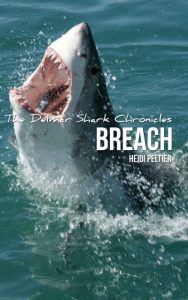 He expects a holiday chock full of thrills when he travels to South Africa and comes face-to-face with the ultimate in high adventure – breaching Great White sharks. What he doesn’t count on is crossing paths with the beautiful American heiress, Harlow Karnes, whose beauty and charm pit Mako against his friends and distract him from the things he loves most. But he soon learns that people are not always what they seem.

After a series of unexpected events, Mako is forced to reconsider his impulsive lifestyle, but is it too late?

This fourth installment of the Delmar Shark Chronicles series is one adrenaline rush after another.

What Inspired You to Write Your Book?
As I said for Involuntary Kings, this book was born from a question one of my readers asked after book 1. She wanted to know what the children of my main characters would be like. I realized that though they are brothers, just like my sons, these boys would be very different. Involuntary Kings was Merrick's story. Breach is Mako's. Considering that Mako is an adrenaline junkie, I knew he had to be the one constantly slipping away from the watchful eye of his bodyguard. He hates being hemmed in by their presence and will do anything to get away. And when he DOES get away, he intends to have some fun. I sent Mako and his cousin Karl and their friend Princess Alex to South Africa because it's a place I've always wanted to go. And for a family like the Delmars, sharks are a passion, almost an obsession. What better place to send them for some high adventure with sharks?

How Did You Come up With Your Characters?
Mako is loosely based on my younger son, Rory, who is balls-to-the-wall, all in, 24/7/365. Mako, like Rory, is not as insecure as his older brother and not nearly as concerned about rules or protocol. Mako is more like his American father than his royal mother. Prince Karl, Mako's cousin, is very loosely based on my cousin, Erick – big and intimidating but as happy-go-lucky as can be. Princess Alex, though it's never said plainly in the book, is intended to be the daughter of the British King and Queen (I still won't mention their names even here). But the real life Royals messed up my plans when they gave birth to their second child who was a girl. In my fictional world, she should have been a boy, and they would have had one more child a few years later – my Alex. Did I mention this book takes place about 20 years in the future?
]