You are here: Home / Fiction / Mystery/Suspense / The Crazy Jack by T.F. Torrey 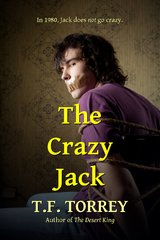 It is the end of the summer of 1980 in Kingman, Arizona, and Jack Trexlor is under pressure. He’s eighteen, and his father wants him to follow in his footsteps and become a doctor, but what Jack wants is to be an artist. Jack’s mother supports him, but she is acting strangely. And everyone, suddenly, has secrets. The trouble boils over when Jack’s girlfriend Diane is attacked, and she doesn’t want to press charges. Jack simply can not accept that the perpetrator will get away with the crime, and he is determined to hold him accountable. Assisted by Diane’s younger sister Elizabeth, Jack pursues a variety of ever-wilder schemes to secure justice, but everything gets progressively worse. When all his strategies are exhausted, Jack turns to religion for help–and that’s when things really explode. In final desperation, Jack concocts one last, crazy, violent, unbelievable plan to set everything right. This is the quest that starts Jack on his lifelong pursuit of lost causes. These are the events that stole Jack’s family, friends, and faith. This is the story of how Jack Trexlor went from a young man with a bright future to the crazy Jack.

What Inspired You to Write Your Book?
This book is inspired by real life events. I found myself wondering about the implications of the phrase “he’ll get his someday”, and I started researching what guidance someone might find. What I found (or didn’t find) surprised me. I started to wonder what someone might do with the motivation to overcome inherent inhibitions. With the right application of pressure, my characters cooperated.

How Did You Come up With Your Characters?
Because I needed to be very close inside the head of the protagonist, Jack, I made him similar to me, though of course a product of his own history, which is very different from mine. His girlfriend, Diane, is an amalgamation of teenage girls I knew in the 80’s. Jack’s compatriot in this adventure, Elizabeth, started out inspired by a real-life young lady I knew, but necessarily changed to support the necessities of the plot. Jack holds his mother in a special place in his heart, and her character grew from my development of how she exists in his mind. Jack’s father began based on the father of a former girlfriend, but rapidly became his own person as I mapped out Jack’s history in Kingman. Most of the minor characters started out based on real people, but in roles far different from their real-life counterparts.

Book Sample
Here’s what it must have been like for Joe:

As he began to stir, his chest heaved and his breathing quickened. His eyes fluttered open, and he felt a momentary panic as he realized that he was still the same worthless piece of shit he was when he fell asleep. This passed, because in his twenty-one years, he’d learned to accept it.

Then he felt awkward. He seemed to have his legs stuck in his blanket, and part of his pillow in his mouth. And what was he doing sitting up?

Panic chilled him as he began to realize that he was not harmlessly and accidentally stuck in his blanket, but securely and deliberately bound to a chair. As the implications of this settled onto his brain, he struggled with the bonds, desperate to defy them–to defy reality itself.

But he quickly reached the limit of his struggle. He had been sitting here too long, and his muscles had grown stiff. His limbs and joints ached with the effort, and now a new realization crept into his skull: someone was doing this to him for a reason, and that person was probably watching him at this moment.

He forced his eyes to search the room, to resolve and understand shapes. It seemed to be early morning. The light was gray, the room a misty kind of dark.

Then he saw me, sitting on the edge of an easy chair, watching his struggle with a look of cold determination on my face. He had to have known, right then, that he was in very serious trouble.

About the Author:
T.F. Torrey grew tired of people asking if the events of The Desert King were real, so he wrote this book to firmly establish that he is not Jack. He is also definitely probably not crazy, although he was eighteen once and he did have a girlfriend, and … the rest is none of your damn business. Nowadays, T.F. Torrey spends his time writing things worth reading and working hard to get a little better every day. He lives in Arizona with his beautiful wife, lovely daughter, and layabout cats. His work can be found online at tftorrey.com.