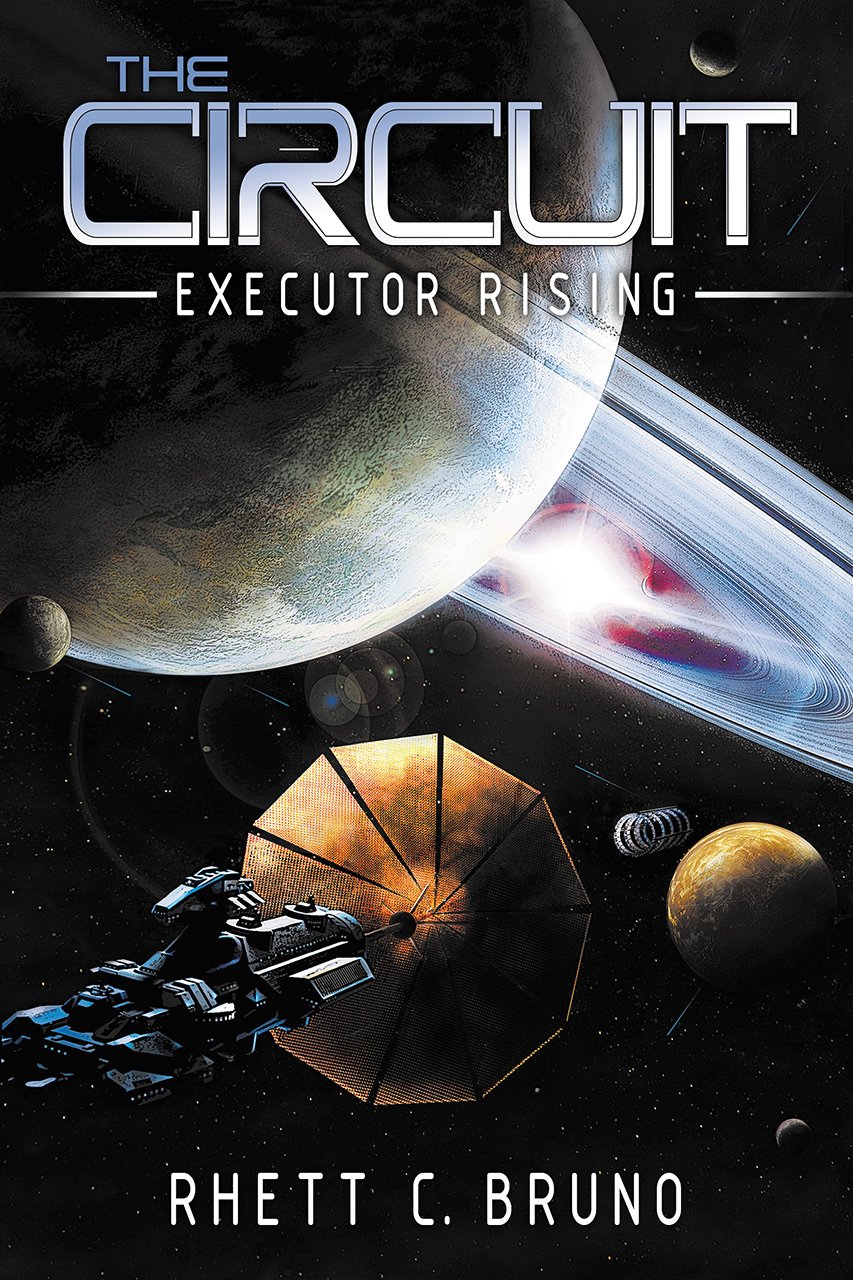 It has been centuries since Earth was rendered a barren, volatile wasteland. With their homeworld left uninhabitable, humanity founded a system of colonies throughout their local solar system. Known as the Kepler Circuit, these settlements are strung together by a network of nonaligned Solar-Ark transports, locked in continuous motion. They have served to provide an influx of resources to every faction ruling over the remnants of humankind, most importantly the newly discovered element Gravitum which is found only in the Earth’s unstable mantle.

By 500 K.C. a religious sect known as the New Earth Tribunal has risen to preside over most of The Circuit. Though there is barely a faction left remaining to challenge them, a string of attacks on their transports force them to summon the enigmatic, yet brilliant, Cassius Vale for help. What they don’t know is that together with his intelligent android creation, ADIM, he is the one orchestrating the raids.

His actions lead to the involvement of Sage Volus, a beautiful Tribunal Executor sent by her masters to spy on their mortal enemies – the Ceresian Pact. In order to find out who is behind the attacks, she infiltrates the ranks of a roguish mercenary named Talon Rayne. Against all her intentions, however, she finds her faith tested by him and his ragtag squad.

While Sage and Talon are engaged in a futile hunt, Cassius Vale initiates his strategy to bring down the narrow-minded Tribune once and for all. But will anyone be able to survive what he has in store for the Circuit?

What Inspired You to Write Your Book?
My initial inspiration came from watching classic science fiction movies/shows like Star Wars and Star Trek and noticing how artificial gravity is just kind of an accepted technology. After doing some research I found out just how far-off most of the theories are and came up with the idea of us finding a new element (Gravitum) deep in the Earth that gives us the ability. When I was thinking up the story I wanted the notion that human curiosity has repercussions to be prevalent and so that was when I decided that the mining of Gravitum would be what unsettled the fragile nature of our homeworld. While that is never directly stated in this novel, it is intended to be implied. Everything else sort of evolved around that idea of Earth being a shackle that humanity is bound to even after they evolve beyond the planet’s surface.

How Did You Come up With Your Characters?
I can’t really say. They all sort of evolved from my initial concept, and I made sure to try to make them each unique from one another.

Book Sample
The android ADIM (Automated Dynamic Intelligence Mech) lay motionless on his back. His magnetized chassis held him tightly against the lower hull of a Class-2 Tribunary freighter. He watched as the astral wake of the smoldering, blue Ion-engines tore across a distorted blackness. Beyond it the stars shone, seemingly locked in their position despite how fast the ship beneath him was cruising.

Creator. This unit is primed to initiate. His thoughts were processed through a communications array linked directly to his maker, Cassius Vale.

Excellent. You may proceed. Remember, the tracking systems must be disabled. The voice of Cassius responded immediately.

ADIM was instantly roused, flipping over and scuttling along the surface of the ship. It was a relatively old vessel, with more squared edges and exposed mechanisms than the newer, sleeker models the Tribune pushed out. The smaller lights around his blazing eyes began to revolve rapidly as his perceptive functions surveyed the surroundings. The maintenance hatch was easy enough to spot. The hollow shaft below it emitted a slightly varying heat signature.

ADIM looked it over for a moment before using the concentrated laser-beam fixed to the top of his left wrist to slice through the restraints. While providing a sufficient degree of pressure opposite the broken seal, he was able to lift it open. A powerful gust rushed through the opening as the pressure rapidly shifted. He waited for it to die down before slipping in through the gap. It took the weight of his entire frame to pull it shut behind him, but he was in. A piercing sound occurred as the space re-pressurized. Then he provided a longer stream of his scorching hot laser to seal the hatch again so that nobody would notice it had ever been breached.

The airlock vestibule flashed red as an alarm began to wail. Quickly realizing that the entry into the ship’s main circulation was sealed, ADIM ducked into the shadow behind some equipment and deactivated his eyes, only a few minutes passed before the door slid open and footsteps moved toward him. He remained completely silent, the soft purr of his core inaudible over the alarm.

The engineer fumbled around the room. He inspected the hatch for a moment, but ADIM’s work was far too adept to be noticed.

“Nothin’ out of the ordinary back here. Must’ve just been an error.” He sighed into his com-link.

“Old piece of shit,” the voice on the other end grumbled. “When we get back to New Terrene, remind me to petition those cheap bastards for a new ship.”

The soldier snickered under his breath. “Will do, sir. I’m headin’ back now.”

Barely a second after the transmission ended, ADIM sprung from his hiding place and snapped the man’s neck as if it were a twig. With his metal hand wrapped entirely around the limp head, he took a moment to analyze the body. Then the tiny blue lights around his frame began working until that very likeness was projected around him…the same stubbly beard; the same green-trimmed NET service suit; the same everything.

He stepped out from the airlock chamber, completely camouflaged to the untrained eye, and the door slammed shut behind him. Infiltration successful, ADIM updated Cassius. This unit is loading the schematic of Class-2 Tribunary freighter interior now. He began strolling down the corridor, doing his best to mimic a human gait.

He has been writing since he can remember, scribbling down what he thought were epic short stories when he was young to show to his parents. When he reached high school he decided to take that a step further and write the “Isinda Trilogy.” After the encouragement of his favorite English teacher he decided to self-publish the “Isinda Trilogy” so that the people closest to him could enjoy his early work.

While studying architecture Rhett continued to write as much as he could, but finding the time during the brutal curriculum proved difficult. It wasn’t until he was a senior that he decided to finally pursue his passion for Science Fiction. After rededicating himself to reading works of the Science Fiction authors he always loved, (Frank Herbert, Timothy Zahn, Heinlein, etc.) he began writing “The Circuit: Executor Rising,” The first part of what he hopes will be a successful Adult Science Fiction Series

Since then Rhett has been hired by an Architecture firm in Mount Kisco, NY. But that hasn’t stopped him from continuing to work on “The Circuit” and all of the other stories bouncing around in his head. He is also currently studying at the New School to earn a Certificate in Screenwriting in the hopes of one day writing for TV or Video Games.