You are here: Home / Fiction / Action & Adventure / The Chaosifier by Mike Evers 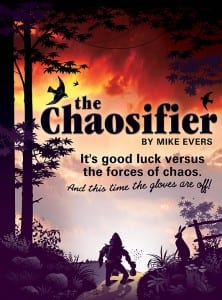 A storm is brewing.

High on a mountain in Central Europe a vengeful chaos lord has managed to get a terrifying device to do his bidding. The future of the whole of mankind is at stake, and only a plucky band of luck goblins can possibly stop him.

There’s just the troublesome matter of a crime wave, global financial meltdown, and WW3 to deal with first…

A rip-roaring fantasy adventure from the author of The Spirit Archer and Campaign of the Gods.

How is Writing In Your Genre Different from Others?
I would like to think I bring a bit of originality to contemporary/urban fantasy in this novel. It’s not your usual type of story.

What Advice Would You Give Aspiring Writers?
There were times that I thought writing The Chaosifier was a waste of time, and that no-one would ever read it. I’m pleased I didn’t give up and that lots have people have enjoyed it. The message is – don’t give up.

Author Bio:
Mike often taps out stuff on his keyboard in the fantasy, urban fantasy and paranormal genres: a habit which his wife finds fairly amusing – and sometimes a little bit strange.

So far he has published two novellas – The Spirit Archer and Campaign of the Gods – with GMTA Publishing. These form part of The Hopfield Tales. The third and final tale is due out in early 2013.

Mike’s debut novel, The Chaosifier, is also available on Amazon, where it is ambushing unsuspecting fans of contemporary fantasy with its general mischief and mayhem.

Mike’s educational background is in History, International Conflict Analysis and Education. He is qualified as a teacher in ESOL and Adult Literacy, and lives and works in West Yorkshire. He’s married to a long-suffering wife, Joanne, and they have a young son called Joseph.

What Inspired You to Write Your Book?
A long time ago I did a masters’ dissertation in the subject of conflict analysis at uni. One aspect of my research was chaos theory. I didn’t really think about it for years, and then I got an urge to write a story about a battle between chaos and ‘good luck’. I was also intrigued by the character of Rubezahl in central European legend. He is the perfect candidate for being a chaos lord.