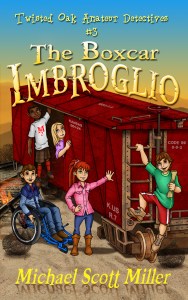 A lost property deed. A homeless man nicknamed Boxcar living on the edge of town in a broken-down railroad car. A cattle rancher digging for oil. A feud over a parcel of land.

When the Twisted Oak Amateur Detectives spend a week at Amanda’s grandparents’ lake house in Kansas, they decide to trace an old property deed they find just for fun. But as the kids investigate, they discover a lingering feud and begin to wonder if the deed holds a secret that some folks would rather keep buried.