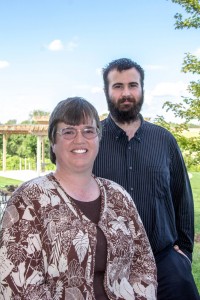 About Charles Siefken and Wendy Siefken: Charles Siefken (1992-present) He is currently enrolled in our local college for automotive technician as well as working part time at a local garage as a mechanic. Christopher Paolini was his inspiration to become a writer. Wendy Siefken (1966-Present) currently is a stay at home mom who works on writing stories, marketing and promoting the published books. Wendy lives on a farm with her family and enjoys reading, gardening and other activities with … END_OF_DOCUMENT_TOKEN_TO_BE_REPLACED

"Kai's Journey" is a story about a young man, set ten years in the future. Kai has spent those years fighting for survival and trying to find a way rid the world of the disease his father created... His father was a military scientist charged with the task of perfecting a formula that would create a superior breed of soldiers. Kai's father accidentally created a race of zombies. Like a virus, it soon spreads to the entire world, unleashing a period of unsurpassed chaos and conflict. In the … END_OF_DOCUMENT_TOKEN_TO_BE_REPLACED