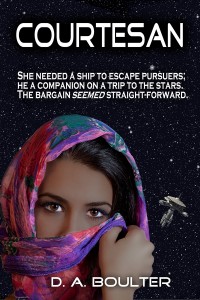 This book is bargain priced from 05/07/2014 until 12/31/2014 She needed a ship to escape pursuers; he a companion on a trip to the stars. The deal seemed straight-forward, but neither told the other everything. Jaswinder Saroya believed that her research in the area of Hyperspace Field Theory would benefit everyone: Family Traders, the InterPlanetary Corporations, Earth's Colonies and governments alike. She erred in not considering commercial and political consequences. Now, someone wants … END_OF_DOCUMENT_TOKEN_TO_BE_REPLACED