You are here: Home / Bargains and Freebies / Bargain Books Under $3 / Courtesan by D.A. Boulter

She needed a ship to escape pursuers; he a companion on a trip to the stars. The deal seemed straight-forward, but neither told the other everything.

Jaswinder Saroya believed that her research in the area of Hyperspace Field Theory would benefit everyone: Family Traders, the InterPlanetary Corporations, Earth’s Colonies and governments alike. She erred in not considering commercial and political consequences. Now, someone wants to steal or bury her research and, perhaps, her with it. With no way to fight this unknown foe, Jaswinder knows she has but one chance–complete her research and publish. To do that, she has to stay alive and stay free.

Pilot Johannes Yrden desires a courtesan, someone to keep him company on the 8 month trip to the planet Liberty and back. He wants someone not from the Yrden Family spaceship and to hell with his brother, Captain Matt Yrden, who believes the TransPlanetary Corporations will stock his line-up with spies.

Yrden’s plan runs afoul of circumstance, which throws him together with one ‘Jazz Saro’, a woman on the run. Forced to run with her, Yrden allows her to convince him to sign her on as courtesan. He needs a companion; she needs a ship, a place to hide. It seems a simple enough arrangement.

Jaswinder thinks she’s found her perfect solution: a hiding place in hyperspace, where she can complete her research using the ship as her laboratory. Unfortunately, she hasn’t reckoned on the possibility of one of her pursuers booking passage, forcing her to maintain the fiction of her alias. The pilot’s family, with troubles of their own, grow suspicious and it becomes apparent she cannot complete her research openly. That leaves her the choice: Do what she needs to do to in order to save Jaswinder’s life or become Jazz Saro. 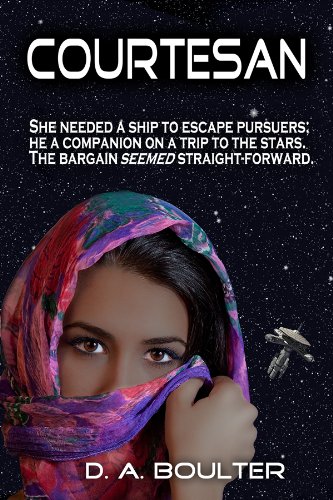 What Advice Would You Give Aspiring Writers?
There are only three pieces of advice I’d give to aspiring writers. And they can be summed up in four words: Write. Read. Don’t stop.

Yes, you can buy how-to books, study the subject to death, but only through practice can you improve your writing. It doesn’t matter how good or how poor your writing is to begin with, with practice it will improve. Keep writing. By reading, both in and out of your genre, you come to see what works and what doesn’t; what you might emulate, what you should avoid. Keep reading. Once you stop, the dream dies. Don’t stop.

What Inspired You to Write Your Book?
While writing another book, “Pelgraff”, I included a throw-away line to build detail in my book’s universe. A passenger in a spaceship hears that they would be entering the ‘J-Channel’ in hyperspace. He looks that up in a reference, and finds that it was discovered by Jaswinder Saroya. Just a throw-away line.

Then I started wondering, “Who is this Jaswinder Saroya? What happened when she made this discovery?” And I wondered what happens to people who make discoveries which can alter the status quo. Are they hailed for their achievements? Silenced? What happens to their discoveries: are they implemented or sat upon until it pays someone to bring them forward.

So, Jaswinder began to haunt my waking thoughts, and as soon as I finished Pelgraff, I began to write a short story for her. But that wasn’t enough — she kept demanding I tell the rest of the story. Finally, I capitulated and wrote the novel.

About the Author:
D.A. Boulter hates talking about himself in the 3rd person. Finds it annoying.

Since my early school days, Science Fiction and Fantasy have intrigued me, starting with Heinlein, whose Starship Troopers I read in the middle 60s, long before I knew about the social and political themes it carried. My seminal year, though, came in 1974 when I got my hands on a copy of Frank Herbert’s “Dune”, which fascinated me with its depth and breadth. At that moment I knew SF&F had hooked me.

However, it took another ten years before I seriously considered writing my own material and another ten after that before I began writing in earnest. Now, with the advent of e-readers, I find myself in the very strange position of being a published author, rather than someone who wrote for himself only. It gratifies me that many have read and enjoyed my works. Thank you.

I’ve worked as a cook, a first-aid attendant, weather observer, radar operator and tech. I’ve worked in the city, in the woods, and in the Arctic. Just now, I find myself on the West Coast of Canada, with my feline companion — one of a line of cats who have shared my writing moments (and interrupted them as well).