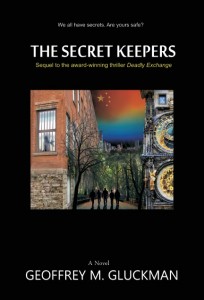 In this sequel, when Sara Nardell and Peter Wellington meet with a man telling a tale of an upscale brothel in the heart of Manhattan, it disrupts the easy life of reunion that Sara and Frank Revere have enjoyed over the last year and a half. Peter springs into action and assembles the Team, now part of a United Nations Special Operations unit. And Sara soon discovers a world rampant with sex trafficking, from Vancouver to China. What begins as a relatively simple mission blows up into … END_OF_DOCUMENT_TOKEN_TO_BE_REPLACED

About Geoffrey M Gluckman: Geoffrey M. Gluckman is the author of the award-winning thriller, Deadly Exchange (2007). The Secret Keepers is the sequel to Deadly Exchange. In 2013, he released Murder of Sex, a steamy romance suspense. For 2011 and 2012, he acted as a second level judge in the Maryland Writer’s Association Novel Contest, critiquing entries for fiction selection. He has been a featured author for Foothill College Author Series, Kathy Patrick’s Girlfriends Weekend, and presented at … END_OF_DOCUMENT_TOKEN_TO_BE_REPLACED