When three-year-old Joey is diagnosed with autism, Kat’s heart sinks. With a single phone number and a few suggested therapies, she and her husband Derek are left to wade through the unknown abyss of ASD. Derek assures Kat their son will grow out of it, but she has done enough research. That never happens. Still, Joey can improve, and Kat vows to make his life better any way she can. Jumping feet first into the depths of therapies and developmental preschool, Kat gives it her all. Everything … END_OF_DOCUMENT_TOKEN_TO_BE_REPLACED

About P. E. Sibley: For P. E. Sibley (a.k.a. Pat Sibley) writing is a passion, or perhaps a compulsion. She was born, raised, and educated mostly in Orange County, California. A voracious reader as a child, she became interested in writing early on. She wrote her first short story in second grade about an ant. It ended rather abruptly when the ant was smashed by a foot. She graduated from the University of California, Riverside with degrees in medieval history and technical theatre … END_OF_DOCUMENT_TOKEN_TO_BE_REPLACED

With her memory and most of her powers gone, Asiliyah finds herself plucked from the perfumed, warmth of Tulsch. She is thrown to the wolves of the Northern Kingdoms as a dark force plots on a distant isle, swelling an army to wash over the Northern Kingdoms in a wave of blood and flame. Targeted Age Group:: 18+ What Inspired You to Write Your Book? I had just finished reading the viking saga Grettir the Strong, which is a saga about a viking who is an outlaw for twenty years and his … END_OF_DOCUMENT_TOKEN_TO_BE_REPLACED 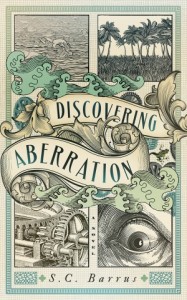 This book is bargain priced from 04/21/2014 until 04/27/2014 An ancient map stolen. A lost civilization discovered. A terrible secret unleashed. Set in an alternate Victorian era, Discovering Aberration follows Freddy Fitzgerald, a rebellious writer and ex-scuttler, and Thaddeus Lumpen, a desperate archaeologist with a slew of dangerous rivals. Together they will stop at nothing to make the discovery of a lifetime. But their island destination hides it’s own dark secrets which can push … END_OF_DOCUMENT_TOKEN_TO_BE_REPLACED