You are here: Home / Fiction / Historical / Soul of Toledo by Edward D. Webster 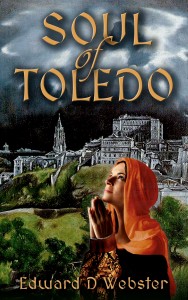 Thirty years before the Spanish Inquisition, the seeds of hatred have sprouted in Castile. Suspicions fester. Rage churns beneath the surface. Viçente Pérez—a man who wields enviable power but harbors a shameful past—is the only one who can keep the tension from exploding out of control.

As the Christian son of secret Jews, Viçente is in a hopeless position—charged with keeping the peace, but always suspected by the city’s Old Christians, unwilling but duty-bound to help the increasingly persecuted Jews, and to aid his king whose rule is threatened.

As war breaks out between the king and his cousins, and García and his madmen rise to power in Toledo, Viçente falls in love with the mysterious Francesca and finds himself faced with impossible choices: love or duty, respect or intolerance, reverence or disdain for his ancestry.

From the courts of kings in Naples and Castile to the chambers of Pope Nicholas and the torture cellars of Toledo, this gripping novel brings to life an era of little-known history in fifteenth-century Spain, a time when a rogue inquisition threatened to destroy the very soul of Toledo.

What Inspired You to Write Your Book?
Traveling to Toledo, Spain (with my wife and 17 year old cat), I learned of the glorious time when Jews, Muslims and Christians created one of the richest cultures in the world there. The architecture, with its Moorish influences drew me in. But of course I knew about the Spanish Inquisition and the expulsions of Jews and Muslims. I wanted to know what had happened. Back home in California, I discovered the book, Origins of the Inquisition in Fifteenth Century Spain, by Benzion Netanyahu (the Israeli Prime Minister’s father). It told the story of a rogue inquisition, thirty years before the church-sponsored version. I was on the path. From there I arranged private lectures with professors in Toledo and Segovia. I learned the politics and history, the culture and landscape.

How Did You Come up With Your Characters?
The actual players in this historic drama, King Juan II of Castile and Alvaro de Luna, the man who manipulated him, were interesting enough, but there was a great host of historical villains who created the false inquisition– Marcos Garcia de Mora and Pedro Sarmiento.
To this gallery of fascinating characters I added a few fictional players whose lives would be in peril –Vicente, a Christian born of Jews, who became a focus of this persecution and Francesca, his love, who lived in the palace of the enemy.

Book Sample
Viçente’s heart pounded. Something had awakened him in the night. A light. Movement—someone with a candle. He found his knife beneath the pillow and rolled off the bed. He heard a woman gasp. “Who is it?” he demanded.
“Please speak softly. It’s Penélope.”
He recognized her now in the candlelight, one of Francesca’s attendants. “What’s happened?”
“Quietly, sir. There’s no trouble. The lady wishes to see you.”
His heartbeat eased as he pulled his sleeping shirt closed and took the robe from its hook by the door. Penélope led him down the curving staircase to the salon. Moonlight shone through the open doorway.
“Sir,” Penélope said. “You’ll find her at the bluff.”
Outside, Viçente felt the balmy breeze. Between the palms by the cliff top, he spotted a lone figure. He strode across the tile patio to the lawn, feeling damp grass between his toes, beginning to hear rocks beating each other with the shifting sea. She stood in a flowing gown, arms outstretched to take him in. He held her, touched her back and sides, felt her breasts against him, her stomach and thighs pressing. Her body—not constrained and stiffened by corsets—felt warm, yielding, inviting. He slid one hand to the small of her back, the other to her breast, supple and full, the nipple turning to a hard pea.
“Another gift,” she said. She raised a hand to rub something against his lips. He parted them, and she slipped mint leaves in. They kissed long and deep.
“I love you, Francesca.”
“And I love you.” She pressed herself up to kiss again.
“Carlo?”
“He’s away,” she said. The thought brought him shivers of erotic joy. He kissed her throat as she said, “Carlo fancies one of the maidens in this town, and when we come each summer, he steals away to spend his nights with her.”
“Hypocrite.”
“Be happy for him, Viçente. He is blissful as we are. Be happy for us.” She tilted her head, exposing more of her throat.
He shrugged off his robe so only his nightshirt and her gown separated them. She pressed a hand against his chest. “Be easy, Viçente. I’ve never given myself this way before.”
He kissed her forehead. “With your husband?”
“I was given to him and came to love him after. I’ve never let myself trust so fully.”
Sensations—the warm, moist breeze, silken skin beneath her jawline, the scent of blossoms in the air and her perfume, her body melting against his. He thought of what he wanted, of what she’d told him that afternoon. “So you love me, and you’re not meant for the King of Portugal.”
“Just for you,” she whispered.
“Would you be free to marry a lowly Castilian?”
“No lowly Castilian has asked.”
Viçente took a step backwards and knelt on the damp sand. “If he did, I imagine he’d do it like this.”
She moved to him and pulled his face to her stomach. “Don’t tease me, Viçente.”
He ran his fingers along her thighs, feeling their suppleness through the thin cloth. He pressed his face into her tummy so hard she gasped. “I’m afraid to ask earnestly.”
“Because you think Alfonso would object?”
Just as likely, she’d object once he told her his parents’ secret. “I’m a converso, undesirable, repugnant, and I’ve seen the way he acts around you.”
“I’m the one who’s impure. You’re just a lovely, strong man.” She slid her hands beneath his nightshirt, gently feeling his shoulder wound. He felt a tingle and braced for pain that didn’t come.
“I’m afraid, too,” she said. “You were almost lost to me, querido. It’s such a lovely moonlit night. Touch me, Viçente. Touch me everywhere. Kiss me and stroke me, please. Make me cry out with joy, but keep this gown between us, and don’t ask for promises or vows. We will build faith and trust and love one night at a time.”
With one hand he stroked from the gentle curve of her stomach to her ribs and breasts. The other cupped her buttocks, the inside of her thigh. His mouth explored, and Francesca sighed with delight. When she joined him on the sand to hug and kiss, they kept their thin garments between. Tears flowed down her cheeks and would not stop for all the kisses he placed upon her eyelids.
Though she’d denied it, the way she’d put off his question of marriage renewed his fears that there was some grand obstacle. He’d speak of it again, and there was still the issue of his heritage to reveal, but this night was for stroking and tasting her body.

Buy Soul of Toledo On Amazon