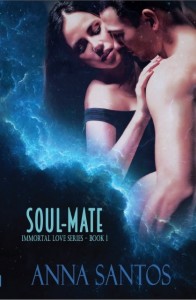 Annabel is a bad-ass hybrid hunter, seeking revenge from the vampire who killed her parents and put her brother in a coma. Arriving in a new town with an undercover identity to protect and the mission to find a pureblood vampire to save her brother’s life, the last thing Annabel needs is to fall in love with the sexy, persistent werewolf who thinks she’s a helpless human in need of a knight in shining armor.

Shane is a dominant werewolf who also happens to be the local sheriff. He has almost lost hope of finding his better half. So when his beautiful soul-mate shows up and rogue vampires try to kill her, he does what any smart wolf would do: he saves her and takes her home, hoping to convince her that they belong together.

When sparks fly between them, Annabel has to decide if she tells him who she really is or runs the other way to protect her secrets.

What Inspired You to Write Your Book?
I had been spending three months writing short stories about paranormal creatures. I was also reading a lot of books with paranormal creatures. I’ve always devoured every book that Anne Rice wrote, and then I found other amazing writers when the vampire frenzy started. But I didn’t write about vampires. I had my own worlds, gods, heroes from my high-fantasy books. But I said to myself: why not? So ideas began to take shape.

How Did You Come up With Your Characters?
I can honestly say that the idea for this book was based in a name: Shane and what a werewolf would do if he found his soul-mate, but she was a secretive hunter with a dark past who had never thought that she could be someone else’s soul-mate because of being a hybrid. The plot between them was really easy. The chemistry was over the roof. The first draft was the easiest thing to write and then when it was time to share my work, it became a bigger story that became even bigger when I began to edit after already have the next three books in the series taking shape.