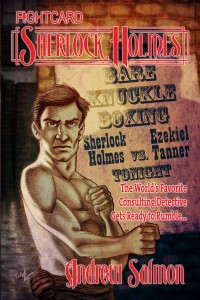 London, England, 1884 … What happened when Sherlock Holmes stepped into the exhibition ring against retiring prize fighter McMurdo four years before The Sign of Four? What incident was Holmes recalling between Mr. Mathews and himself in the waiting room at Charing-Cross in The Adventure of the Empty House? Sherlockians have wanted to know for decades. The answers can be found in Fight Card Sherlock Holmes: Work Capitol …

Victorian Slang for a crime punishable by death, Work Capitol finds the world’s most famous consulting detective – accompanied by the ever stalwart Dr. Watson – chasing a diabolical murderer through the dark, illicit, world of Victorian bare-knuckle boxing. To solve the case, Holmes must take a desperate chance, toeing the scratch line opposite London’s most dangerous pugilist – Ezekiel Tanner …

Sometimes the simplest crimes hide the darkest secrets … And this time, Holmes and Watson know brawn will count as much as brains …

What Inspired You to Write Your Book?
I was approached by Fight Card Books to try my hand at a tale featuring the boxing ability of Holmes as mentioned in the original tales. As I have been writing Sherlock Holmes stories for awhile (and winning awards for them), I was eager to explore this unexplored aspect of the Holmes mystic.

How Did You Come up With Your Characters?
Sherlock Holmes and Dr. John Watson have been in the public domain for awhile and they are incredible characters this author has had a blast writing. The villains in the tale are a combination of personal, pop culture influences.