You are here: Home / Fiction / Shadows by Nicole Belanger @nbelanger6 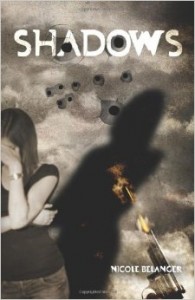 Somebody’s brought a gun to the hospital and he’s out for revenge. Kristie Webb finds herself face to face with the shooter and, in a struggle to survive, has to find a way to save those around her. When she wakes up a few days later in a hospital gown, she finds out the shooter has gone missing and nobody knows who he is. Not only does Kristie have to fight against the shadows with the issue of who to trust, she also has to struggle against her own inner demons and her post traumatic stress envelops her. She isolates herself and finds herself fantasizing about death.

This is a story about a young woman who has to learn to trust herself and those around her. There’s a light at the end of the tunnel: the love that flows between her and her partner, Gage. But will that light be enough to scare away the shadows of despair? Is that love enough to save her? Will she ever find out who brought the gun to the Pediatric ward, or will he slip away and never return again?

From the back cover:

“When someone brings a gun into the hospital, the world flips upside down. I quickly learned I couldn’t trust anyone when he slipped away and I wondered if I could even trust myself. There was a time when I welcomed the shadows with open arms. They comforted me with protection from the nightmares. They settled my anxiety and became my greatest companion. They reminded me of my enemies, warning me I wasn’t safe. But there came a time when I feared them, afraid the darkness would consume me and I’d never find the light again. I became isolated, consumed by my fear of the night. ”

What Inspired You to Write Your Book?
I currently work in a hospital, and I originally planned to write the entire story based on a shooting in a hospital. It was supposed to be a one day story, showing the events of the shooting. I’ve never been in a shooting, and that I know of, there haven’t been any in the hospital I work at. However, one day I was sitting at the table with my brother, about two chapters in on Shadows, when he mentioned making it a story about finding herself. I asked him what he meant, and he told me “a shooting’s traumatic, what’s going to happen to her after the event?” I realized that Kristie Webb, the main character, would have to have a way to cope with it. Post Traumatic Stress Disorder (PTSD) is common after a traumatic shooting, and I knew, right away, that this would be what Kristie would develop after burying her fears. They’d have to come out, somehow, and why not do it in the form of PTSD?

How Did You Come up With Your Characters?
It was hard, actually. I like having a strong lead character, but I always find a story boring if there’s no change for the characters. Kristie Webb is a new nurse (which was easy to write since I’m a nursing assistant so I know what an average day starts out like for a nurse) and she wants to make a good impression. Kristie is strong, compassionate and thinks quick on her feet, but she’s also flawed. She hits a moment of weakness and it almost destroys her. That’s what makes her human. Everyone changes, everyone becomes a suspect. Gage Coburn, Kristie’s boyfriend, is the good cop and he’s by her side every step of the way, but even he becomes a suspect when he becomes secretive and keeps Kristie out of the loop regarding the case. There are so many character’s that came into play, it’s so hard to talk about them all. They were strangers when I first started writing, but I’ve grown to know them and like each and every one of them – even their flaws.

About the Author:
First, I’m a 19 year old author; which I’m sure you know since you’re reading this. I started writing at six years young and I guess I had a lot of random ideas floating around in my tiny brain that I needed to get out – somehow. A pen and a piece of paper later – which turned to a laptop down the road – I’ve started my third book. Funny how things work, isn’t it? I’m a certified nursing assistant. Yup, that means I’m a professional butt-wiper, AND I get paid for it. No, I’m just kidding – sort of. There are many things I do as a CNA; I’m the eyes and ears for both nurses and doctors, take care of patients and families and try – yes, try – not to annoy them when I enter the room every hour of my 12.5 hour overnight shift. I’m currently in nursing school. I love photography, but I’ll be darned if you try to put me on the wrong side of the camera. I’m certainly no model. I have this awesome juggling act where I balance a full-time job, school, babysitting my two godchildren, writing a blog and spending time with friends and family. Did I mention I can balance on one foot at the same time, and rub my head while I pat my belly? Well I can’t do the latter, but I can at least try. That counts for something, doesn’t it?

Links to Purchase eBooks
Link To Buy Shadows On Amazon