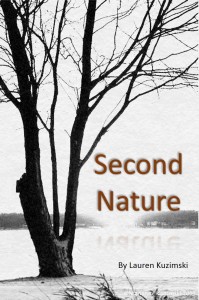 Fae had spent the entirety of her life training to protect her Queen.

Jace had spent the majority of his life trying to kill all the Queens.

In a world separated by realms and each realm ruled by a Queen, only the Queens are supposed to be masters of the elements: earth, wind, water, fire, light, dark.

One hundred years ago though a different group of elementals rose up and challenged the Queens. While the conflict had been long and not without cost, the secondary elemental group eventually was defeated and banished. However, that doesn’t change the fact Fae, a fire elemental given a second chance, has trained her entire life to hunt and kill other elementals in the name of her Queen.

When it’s discovered the group that was banished is returning, Fae finds herself having no choice but to team up with the exiled earth elemental in hopes of stopping the rest.

What Inspired You to Write Your Book?
I originally wrote this story back in 7th/8th grade with my best friend at the time. We had wanted a story to escape the monotony of class, and somehow this was born (albeit under a different name). Originally, the story was a tad bit more fantastical (some of the characters were a bit less human and more talking animals).
Years later, and with my friend’s permission, I decided to update the book and completely rewrote it. Some of it I kept the same (our main characters for example) while others I re-invisioned. What really inspired me was wanting to write Jace, the male protagonist. He’s a complicated mess- a villainy background with an urge to do better. Before I started writing, I would see him in my head and certain scenes playing out, so before I knew it, I had outlined Second Nature into three parts.
From there, I sat down (mostly at midnight to avoid my class schedule) and worked hard to make this world come true.

How Did You Come up With Your Characters?
Jace was created because of my enjoyment of having characters that don’t fall into “hero” of the story or “villain”. I like characters that tend to toe the line, and that was how Jace came to be. A villain in his own right trying to do better, trying to redeem himself.
Fae was born because I believe in strong female characters. I wanted to write a story that encompassed having two strong leads (one of each gender); two people that would interact and lend each other strength and drive the other up the wall at the same time.

Book Sample
The fields that would usually be full of food for villages and nearby villages were decimated. Wind damage had obviously come in and destroyed all the crops. Far off, both Fae and Slingshot could hear the wails of the villagers. Jace didn’t need to be told Arin did this on her way to get to him; she probably even did it on purpose to punish the realm he was from.

Fae pointed out, “If this was everything they had, there is no time to re-plant and let them grow before winter comes.”

“They’ll starve,” Jace agreed, putting away his flute. He found it odd that Autumn wasn’t already out here trying to calm the village. It might not have been one of the noble villages, but he remembered this one from his time. It provided a lot of the food for the realm. Sighing and knowing the cost, he stepped closer to the field until his feet were in the moist dirt of the rows of crops.

“What are you doing Essca?” she hissed.

“Slingshot,” he reprimanded. “My name is Slingshot.” That was all he said before his eyes fluttered shut. He felt the living remnants of the destroyed stalks, and he allowed his own energy to flow out and fill every plant. This would be exhausting just due to the sheer amount of damage.

Fae knew nothing could be done for these people, so she turned and kept walking. She felt bad that Esscas could do such immense damage yet not care. She was not stupid; she knew just as well as her Essca prisoner that this was probably Arin’s work. The fields looked like a tornado had literally dropped down on it, and considering what she had seen of the realm, that didn’t seem like a likely scenario that a real tornado just appeared.

When her rope grew taut, she turned to see what had caused the earth Essca to stop. She saw him on his knees, panting with sweat dripping down his brow. She hadn’t even gotten a word out when she saw the fields.

All the destruction was gone. The entire fields were reap with golden corn and green beans and other ripe vegetables. Everything destroyed had been regenerated; the broken stalks, the ones no longer in the ground, still littered the ground, but everything that was still slightly alive before Slingshot got to it was now full of life. Even plants that shouldn’t have fruits for months still had full, ripe food just waiting to be picked.

Fae heard the cries of the villages shouting ‘miracle’ over and over. She would call it that too if she even could form words at the sight. It just didn’t seem possible, and while Fae had yet to really see Slingshot fight, she believed the stories Cole had told her about him now. He was exceptionally powerful which made her wonder why he had yet to simply escape his binds.

“They shouldn’t be punished for my crime,” Slingshot panted, closing his eyes feeling slightly woozy. “I betrayed Daric. Not them…”