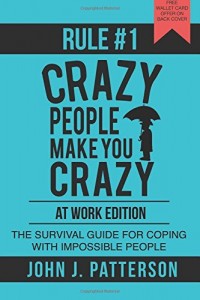 The sub-title of the book is The Survival Guide for Coping with Impossible People. This is not a get rich or get sex self-help book. This is about getting your life focused on what is truly important.

Who should read this book?

Life is too short and too precious to allow ourselves to be side tracked by impossible people and the impossible problems they create.

That life is short and precious is a truism, but it is a truism that resonates deeply in the hearts of those of us who have dipped our toes into the waters of middle age or beyond.

Perhaps the realization comes when we hit a 40th birthday or a 15th wedding anniversary.

All of a sudden, life is flying by.

What we want at that point more than anything is to pay attention to what matters. We want time for precious things whatever unique combination of family and friends and hobbies and faith and community brings each of you his or her unique sense of joy and fulfillment. That is what makes this a genuinely different kind of self-help book.

What else makes this book different?

The book is friendly, conversational and entertaining. Some people see it as serious book that has cartoons; others see it as a funny book with some serious points to absorb.

It is written is to be a quick satisfying read. That airplane ride to Chicago becomes an entertaining learning experience.

A Rules Wallet Card is provided free to every book or e-book purchaser.

You will find new and interesting concepts on every page.

What Inspired You to Write Your Book?
My muse made me do it.

Ever since I retired from the working world, the Muse kept insisting that I had something to say that could help others in their working life.

The muse would not let me sleep until I helped people survive the hard world of crazy people at work with my experience and perspective.

How Did You Come up With Your Characters?
Nonfiction.

Book Sample
Everyone encounters crazy, impossible people in their lives. How do I know this? Well, this is a subject I’ve been interested in for more than three decades now.   My first real job was as a salesman in a stereo store, and the guy who owned that business was flat-out crazy. Later, I moved into computer programming. Then came a stretch as a partner in a big consulting firm, followed by stints as chief operating officer at two different companies.

I encountered crazy people in every step on that journey. As my curiosity about this phenomenon grew, I would often bring the topic up in casual conversation with others. Every time I did, I would hear hair-raising stories from people about the crazy people doing crazy things in their lives.

I don’t think I ever heard anyone say, “I don’t know what you’re talking about.”

That was true in all kinds of crowds, whether it was factory hands or executives or schoolteachers or middle managers or full-time moms— you name it.

The conversations all shared a common thread, too, and that also crossed any lines of class and gender and ethnicity that I noticed. Everyone found dealing with impossible people to be the same sort of experience. It was emotionally draining. It left them feeling tired, irritable, and even depressed. Worst of all, it kept them from devoting time and emotional energy to things in life that are much more important.

Rule #1 has been a long time in the making. Its origin dates to the early 1990s when I worked at a consulting firm that helped big corporations create and install some powerful new database systems that were just then becoming available.

One day a boss called me and two other mid-level managers in for a chat. He presented us with, as he put it, “the opportunity of a lifetime.” It involved moving to Atlanta and leading the team of 50 that would install a complicated new billing system for a utility company.

Some things never change. When a boss in the corporate world talks up the “opportunity of a lifetime” to ambitious young managers, more often than not it all ends up being a euphemism for, “Don’t expect to see your spouses and kids for a couple of years.”

My workdays in Atlanta generally started with a 6 a.m. managers’ meeting and ended around midnight. My wife, Katharine, was caring for our two children, a four-year-old and a one-month-old. Most days, she would be asleep when I left in the morning, and she’d be asleep when I returned home. She laughs today about how the “together” part of our life together in Atlanta consisted of her waking up briefly twice a day to the clatter of a noisy garage door just below our bedroom.

Every systems job has its share of glitches and frustrations, and we ran into an array of such headaches in Atlanta. We managed to work our way through the bulk of them, but a couple of issues proved problematic.
They lingered on, day after day. Every time victory seemed just over the hill on one of these problems, it turned out there was a bigger hill just over the rise. Days stretched into weeks, weeks into months. The job started to resemble a spot-removal operation straight out of Dr. Seuss’s The Cat in the Hat.

Along the way, the three of us managers began to sense that these intractable problems shared something in common. They weren’t programming issues as much as they were people problems, in the sense that the people working on them were behaving in irrational, nonsensical ways. It was almost as if they were operating in a parallel universe out of a science fiction film, one where the rules of logic are completely different than the ones here on Earth.
Eventually, the three of us ended up on the brink of despair. Then, during one of those 6 a.m. meetings, my colleague Rick stood up, walked to a whiteboard, and picked out a marker.

“OK, what we’re dealing with here are problems that the three of us have never seen before,” he began. “We should start at the beginning. Let’s at least give these problems names. Right about now, I am thinking that most of the names should be quotes from disaster movies.”

We took Rick’s joke and ran with it. At every turn from there on in dealing with our intractable problems, we’d invent a wacky name for the trouble at hand. There was “FUD,” “The Bag of Shit Theory,” and “First Guy on Paper Wins,” among others.

A funny thing happened as we built out Rick’s whiteboard. The joke slowly evolved first into something half-serious, and then it started to reveal surprising truths about the situation we were in. If you’ve skimmed the table of contents, you already know that several of the chapter titles in this book are taken straight off of that whiteboard.

Perhaps the most striking thing that we noticed was the way that one of our made-up problem names in particular kept resurfacing at the center of every intractable problem. Not only that, it always seemed to climb to the top of the priority list when it came to solving those problems.

It was called: “Crazy People Make You Crazy.”

Crazy people cause crazy problems all by themselves, but the biggest danger in what we eventually came to call Rule #1 situations comes not from the crazy person, but from the so-called normal one.

The frustration and confusion that crazy people can cause often leads normal people to behave in abnormal ways. We might start making decisions out of panic or anger. We might lose our temper in the workplace. We might take our troubles home and lash out at spouses and children.

Basically, what we learned in Atlanta is that the second crazy in Rule #1 matters even more than the first. No matter how infuriating a situation gets, it’s critical to maintain our sanity and our self-control. It was an important first lesson that set me off on a long journey toward developing better ways to recognize and cope with impossible people.

This book is the result of that journey. I hope that it helps you on yours.

Buy Rule # 1 – Crazy People Make You Crazy (At Work Edition): The Survival Guide for Coping with Impossible People On Amazon