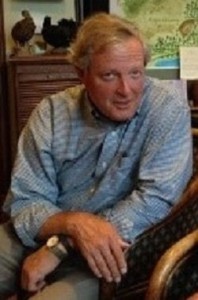 About John J. Patterson:
Over a 38-year business career, Mr Patterson held senior executive and consulting positions in a number of industries. Most roles were leadership positions in the Operations and Technology areas. He was EVP/COO for two companies; partner with a major global consulting firm; Co-founder and president of a regional consulting company.Early in his career, he was a production scheduler in a glass bottle factory, a stereo salesman and later a computer programmer and project manager. He started a record store and a brass furniture store.

Mr. Patterson resides on Spring Branch Farm in Butler, Maryland with Katharine, his wife of almost 35 years. They have two wonderful daughters, Grace and Hannah. He and Katharine travel frequently usually on birding adventures.

What inspires you to write?
My muse made me do it.

Ever since I retired from the working world, the Muse kept insisting that I had something to say that could help others in their working life.

It had to do with my running list of rules to survive in the workplace. I developed the list over a 35+ year career that progressed from glass bottle factory production scheduler, stereo salesman, programmer, Anderson Consulting (now Accenture) partner, consulting firm founder, and two COO positions.

If you ask anyone who worked with me they will tell you that I would often refer to the “rules” when problems arose – “Have I told you about Rule #7?” My colleagues and co-workers started to say, “Have you just got a list of these rules?” I did make a running list of the rules and you can still find versions of them hanging over some of my co-workers’ desks today.

The rules all revolved around Rule #1 – Crazy People Make You Crazy. It is a recognition that there will always be some folks you deal with at work who will not be logical or grounded or willing to run with the plan. Their condition may be permanent or temporary. Management and leadership training assumes your supervisors, co-workers, and staff will indeed be logical.

The muse would not let me sleep until I helped people survive the hard world of crazy people at work with my experience and perspective.

Tell us about your writing process.
I was lucky in this case. Writing a nonfiction, self-help book I already had my list of 10 rules to start. Actually, were 13 or 14 but we cut it down to 10. I had a lot of talking points and stories which I wanted to get across after 35 years in the business world; so I wrote a short title for each story in point on a Post-it note. Then I put them on the wall and organized them by the 10 rules. I then created a separate Word file for each chapter/rule. I then wrote the details of the talking points in each chapter. From there there was a lot of judgment, re-prioritizing, and adjustment to get the words to sing together. I did try some software but the learning curve is too great and the flexibility to small for me to work with.

What advice would you give other writers?
Be cathartic in your writing, get it all out and down on the page. You may adjust and pull things out later but there a lot of good pieces of my book that just came from getting it all out.
Have an alpha reader and a beta reader who are unmerciful in their critique and suggestions for your book.
The writing of the book and getting it in book form is the easy part. You need to drive the marketing side yourself. Even with a traditional publisher you have to do a lot yourself.

How did you decide how to publish your books?
I reviewed the market between traditional publishing and self-publishing. I found the traditional publishers expect a writer to have his own marketing platform, his own development messages, and his own marketing strategies. Producing the book physically is pretty straight-forward these days. There are lots of folks to help in that process. I found that it was also a long waiting time if you did get picked up by a big publisher, plus the song and dance for an agent, to even get considered by most publishers. All that for two dollars per book wasn’t worth it to me.

I think I won’t get many chances to write and publish books. If my book published by a traditional house doesn’t sell, they have to let it go. But I write because I have something I think people should hear. So the likely scenario is after dancing for a year for an agent and waiting for the publisher to publish the book for a year or two, most books do not sell and go to the discount rack if they are lucky.

I believe there are roughly 7 billion people in the world (at last count) and there is going to be a group of them who will eventually benefit from my writing. So I might as well start finding them myself.

The decision to self-publish was the only option from my perspective.

What do you think about the future of book publishing?
I think book publishing is very bright in the future. The key is how open self-publishing makes the market. People before, couldn’t gather their thoughts and produce ideas of value for publication, and now they can. And there are people out their learning, and thinking, and feeling, and reading the books that are produced.

What genres do you write?: Nonfiction, Business & Money, Self-help, Self-improvement