You are here: Home / Fiction / Mystery/Suspense / Riley and The Rat by Ken Klopper 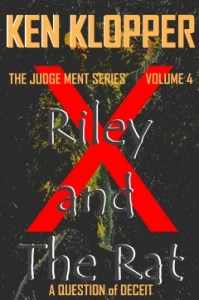 James Riley’s plea for help sends William Ment on a journey that uncovers a path of lies and deceit as he unravels the hidden truths behind the death of his colleague, Frank Motaung and the demise of Ricardo Bernato alias Ricky the Rat.

Not able to move forward, Ment must retrace his steps and follow the trail that leads him back to Mandy Kershaw, Frank’s exotic lover. What secrets does she hold?

A visit to Gloria and Eddie who are doing jail time for Frank’s murder provides a further clue despite their reluctance to talk.

Returning to the Oasis Game Farm, Ment discovers the important link that he is looking for and the key to Riley’s dilemma.

But ultimately only James Riley holds all the answers as finding him takes on a new dimension.

Is there anyone out there who is not serving their own agenda? Are the seeds of distrust scattered everywhere and sprouting with increasing vigor? And has a single rat led Ment to the horde?

Volume 4 of The Judge Ment Series. Reading the previous volumes is recommended but this volume may be read as a standalone novel.

What Inspired You to Write Your Book?
My interest in crime and the law. This is the 4th volume in The Judge Ment Series in which a judge is obliged to strip off his robe and put on the coat of an amateur sleuth. He not only uses logic but also his strong sense of intuition.

How Did You Come up With Your Characters?
All the characters evolve around the main protagonist, Judge William Ment and include his friends, colleagues, and family.The main base of operations is Ment’s courtroom and from there things develop and Ment rubs shoulders with serial killers, other detectives, game poachers, police officials and even working girls.

Book Sample
The sound of my cell phone brought an end to my unexplained anticipation. It was a new one, a gift from my wife, Mary, who thought it was time that I was gently nudged into a new generation of technology—the world of touchscreens—that I was so reluctant to enter. While Tracy was explaining how far she had progressed with her Candy Crushing, I was still searching for the button that allowed me to answer a call.
It was an unidentified number.
“William . . .”
Something about his voice told me to shut up.
“I’m in trouble . . . Need your help. Don’t . . . go to Shadow or the police. I—”
“Riley! Riley, are you there?” He was gone and there was only the sound of my own voice.
Jabbing the icons quickly and after opening two incorrect programs, I managed to extract Riley’s number. It went straight to voicemail.

About the Author:
Ken Klopper has been involved in law for many years in his capacity as prosecutor, magistrate, advocate, and judge. He is a Criminal Law expert and has dealt with all forms of crime in various courts, including the High Court. He is also a musician and songwriter. He lives and works in Cape Town, South Africa.