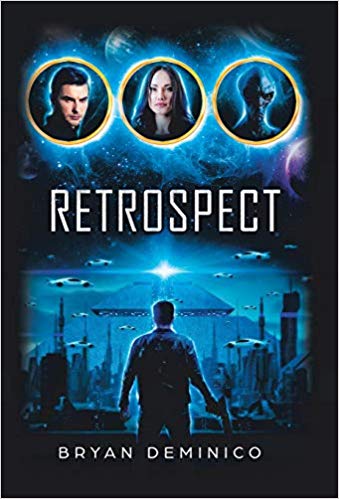 In the year 3421, human, novus, and alien races coexist. At the heart of this existence, the United Planetary Congress, containing both Planetary House of Representatives and Planetary Senate, forms the foundation of political theater. The Galactic Interpol Society must now investigate RETROSPECT, a set of stolen codes capable of crippling a newly developed artificial earth planet. Agent Jonah, one of the society’s top-priority agents, must immerse himself within the violent political shadows surrounding RETROSPECT while fighting off novus terrorists, a rogue galactic agent, and a powerful political figure.

What Inspired You to Write Your Book?
It all started when I was probably too young to watch the last twenty minutes of an old James Bond film. After that, I wanted more. But with my vivid imagination, artistic side, and feeling a need to create, I wanted to eventually write a book of my own, my own story, my own creation. The problem when you are not even ten years old yet, not enough life experiences. So keeping writing and creating as a side hobby, I didn't forget it. One story I kept going back to eventually became a first draft of a book in 1999. After nearly ten years of Army service, I dusted it off. Being a Bond fan, now with my military experience, and a classic sci-fi fan, I rewrote it, and rewrote it, and injected science fiction themed sociology and political intrigue into the book's backdrop narrative. I rewrote some more, and here we are – my first self-published novel.

How Did You Come up With Your Characters?
At first, I knew who all the main characters would be. But being 17 years of age, the first draft of the book did not capture that essence creative writing should carry when characters are concerned. But then I grew, and so did my writing. We all need a hero, and a villain, and some characters in between those basics to bind the good versus evil idea. But better yet, the characters in Retrospect add to the plot-ride readers will become absorbed in. In a specific key character, a robot, I created a memorable character I feel readers will want to see again. And in another character, a key novus crime lord, the plot twist develops and paves the path for an overall exciting read.

Book Sample
The explosive force chased Jonah’s body out of the building. His face and hands cooked, feeling the fiery thrust behind him. Air gusts brushed away the heated feeling, and gravity became the pilot. Jonah’s body twirled forward and plummeted, feet dangling up. His head pointed towards a faraway hazed middle level. Core muscles contracted, and Jonah grunted, rotating his body around. He swam a hand through wind currents. After chaotic movements, he managed to point it at RWB’s massive exterior. He steered his other hand against hardened airflows and found the side of his watch. As air whipped his skin and eyes, retinas vibrating alongside quaked equilibrium, he attempted to steady his fingers and aim.
He pressed the watch’s illumination button three times. A miniature prong, shaped like a bullet tip, emerged. It speared through the air. A strand of nearly invisible high-tension fiber line followed the prong from the watch’s internal tele-opt centrifuge. It met the building, spinning deep enough for particle exchanges to allow a locked connection.
The prong settled. As the watch detected increased pull around Jonah’s arm, it activated a visual circular bright yellow outline around his wrist. The design spun around in unison with its internal electromagnetic field system, preventing Jonah’s arm from snapping off. The padded anti-pressure tech formed a type of airbrake, ending Jonah’s freefall. His body angled towards the building’s exterior, and he positioned his legs and feet for impact. Rocked back and forth from the acrobatic endeavor, Jonah’s feet finally struck solidity. He pounced back a couple of times until he balanced leg positions. The tips of shoes soon slid, and the noble agent slowed to a finalized foot grip.
Jonah dangled, chilled gusts slapping his face. He enforced heels to achieve a propel rappelling posture. Jonah grunted again, stressing hip muscles, further digging feet into the building’s side until satisfied. Suspended about thirty stories above RWB’s middle level entrance zone, Jonah felt a thankful thought as he glanced at the circulating magnetic ring pattern around his wrist. “I’m glad that worked out,” he puffed. Jonah bobbed his chin down and looked below. Miniaturized crowds of evacuees covered in blue and red emergency vehicle lights, and middle level traffic schemes, still moved about. Unhindered natural airstreams filled weary lungs, and he panted its coolness out of loose lips. Jonah changed views and looked above. High level hover traffic wrapped around RWB, racing towards random district destinations. It appeared evacuation control had not yet impacted traffic vicinity the building. Someone, somewhere, had made the decision to not yet do so, limiting suspicion, for now.
Jonah balled his left hand, stretching knuckles and tendons. He guided the free hand above his head. Another gust of wind, this one warmed by sun rays, wrapped around his body. He lined fingers and pressed the illumination button once. The watch purred, and its gear ratios pulled Jonah, a reversed tele-opt procedure. The fiber line reentered the watch. Jonah’s body propelled upwards. As he whirled along, his face cringed for a moment. A variety of painful feelings throbbed. The side of his ribs ached, as some slight internal bruising had occurred, and a small portion of the side of his head was numb. An eye twitched, and a chill traveled from his forehead around an ear. Jonah wiped the side of concern near his face and looked at his hand. Staring back at him, red blood, sticky and cool. A small nonthreatening slice along the side of his head had happened, and Jonah ignored it.
Jonah would soon pass by the 48th floor since the prong had attached into many levels above the shattered panel. Mini plumes of grey smoke smoldered from the shattered wall. Jonah chomped his teeth as he decided on an ingenious plan bordering layers of insanity. He jerked his hand at the watch and tapped the illumination button again, braking his ascent. Legs swooped side to side. He had earlier dangled like a clueless puppet, strings intertwined around Trigarous’ fingers, but he was clueless no more. Jonah studied the smoke and shattered material a few floors above his head.