You are here: Home / Fiction / Science Fiction / Put The Sepia On by Nick Feldman @NickZG 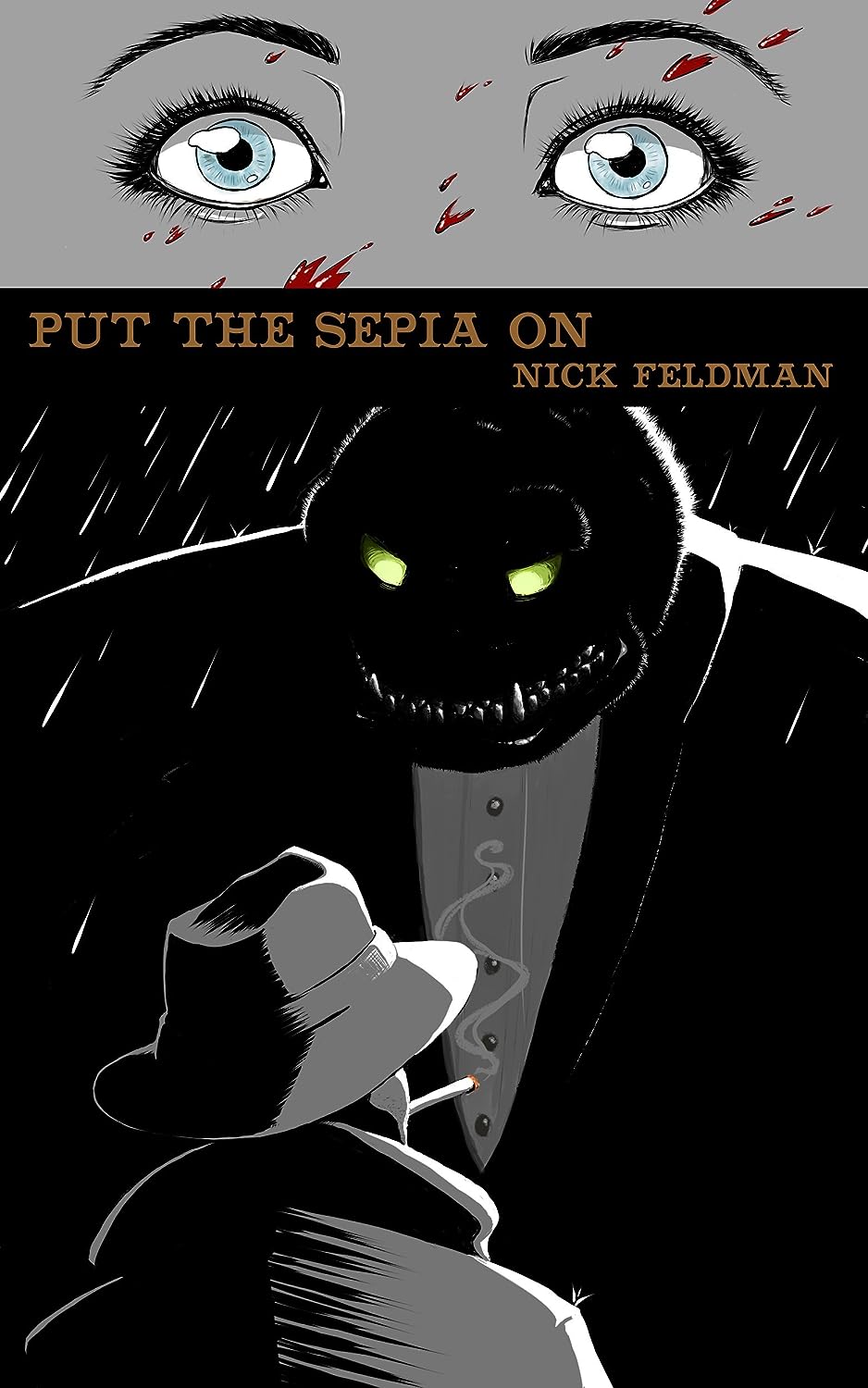 In a bombed out dystopia ruled by a corrupt corporation and plagued by roving gangs of mutant cannibal bikers, one detective is just dumb enough to stick his nose where it doesn’t belong on behalf of two women he cannot trust. Adventure ensues.

What Inspired You to Write Your Book?
I was actually brought in to write this book as a companion piece to the second concept album by Seattle musicians The Portrait Now. Sadly, things happen and only the book was ever finished.

How Did You Come up With Your Characters?
The detective is really just a riff on the classic hardboiled narrator, with a little bit less confidence. The best character, Lime, is an homage to Orson Welles in general and Harry Lime (from “The Third Man”) specifically, so if you want to imagine Welles’ voice for his dialogue I wouldn’t discourage you. Rita is similarly named for and inspired by the ultimate femme fatale, Rita Hayworth.

Book Sample
To my right, there’s an old-make Mech, designed for Dogs instead of Corporation trained pilots. It doesn’t handle as well as the models the Corporation uses today, but that’s ok because it’s three times the size and has enough power to lift seventy-five tons… per hand.

And it goes on and on like that for a thousand feet. A whole bunch of classic (and restored) raider bikes, discontinued because no human is big enough to ride them and they’re twice as fast as anything cost-effective and man-sized. Lime’s hoarded about three hundred of them. All kinds of fun explosives, and lots of big blades, spikes, and bludgeons on the ends of heavy chains that no man could lift… but a Dog with a decent workout routine can handle ‘em one handed. I’m standing in an armory.

“Robert works as a clerk for the Repossession Division,” Lime explains with a good-natured grin that’s scarier than all of the weapons in the room, except maybe for the box of grinder-grenades (bombs that release dozens of rotating and rusty drill-bits upon detonation) sitting on a nearby shelf.

“So you’re opening a museum?” I ask because he’s waiting for me to ask something.

“There’s a lot of ground to cover between here and the capitol buildings,” I point out. Lime shrugs, the way he might if his afternoon drink only had three ice cubes instead of four.

“Sure. And the people, they’re as oppressed as we are. They’ll fall in, marching behind us, a million tallies in the profit margin becoming a million patriots. Think of it as a revolution, if you will.”

“With you sitting on top of the hill at the end, naturally.”

“Why tell me?” he might just be bragging. But he’s too smart for that. He walks up to me and pats me on the back, like we’re pals. I’ll try explaining that to the bruise his paw left; you don’t need to ache, buddy, it was a friendly smack.

“Because, my dear detective, I want your help.”

He clasps his giant hands behind his giant suit and strides away, musing. “Is it really so hard to fathom? You hate the Corporation- so do I. Our old enmity, if you choose to see it as that, which I don’t, for the record – more like a friendly game of one-upsmanship – but whatever it was, it hardly matters now, does it? It was all at the instruction of the Corporation, no?” He turns back and grins at us. “It’s not so bizarre; and you wouldn’t be the only man on the winning team, of course. After all, Robbie here sees it our way, don’t you Robbie?”

Robert’s too scared to speak, but he nods, and it looks like he means it. The Dogs are selling freedom, and that sounds ok as long as you don’t mind the tax. Being a former government employee, though, I hate me some taxes.

“No soap, Lime. I don’t like the Corporation, sure, but at least I know how they operate. I can live in their world, and be left more or less alone. Yours? You’d have a knife in my back before the dust settled.”

Lime shrugs amiably.”Technically, I could quite easily put one in you now. There’s no need for this posturing, my old friend; once the dust settles there’d be no reason for us to be at each other’s throats ever again. I’ll be in charge, you’ll be rich, and… well, does there really need to be anything beyond that?”

I say nothing, but I must be thinking it pretty loud because he gets that gleam in his eyes again and…

“Ah, her?” He pauses for effect, or maybe just to try and read my face. I’m guessing its light enough reading – like an obituary. He waves one of his big mitts, dismissing the issue. “Well, you can have her. Total clemency, for both of you. Free reign in a brave new world.” When I don’t say anything to that, he continues, “Don’t be so skeptical; I’m greedy, not petty, you know.” Robert almost works up the sack to ask me who the “she” is. Almost.

I take a long look at Lime before I speak. I think he’s on the level with this; he’s played dirty before, but never cheap. And using her to get to me would be beneath him, although it would probably have worked if it weren’t, once upon a time. But times change, and while I can still remember how she looks and smells and sounds and tastes, I also remember how she plays. Put it this way; if I’m on the level, Lime’s under the table, and she’s poking around the basement. No sale.

“Lime, I’m not your friend, and I’m not here for your revolution, or your money, or her. I’m here because somebody paid me a lot of money to take Robert here home and teach him some manners.”

Lime’s smile disappears. He snaps his fingers, and one of his flunkies hands him my cash. “This money? This is nothing. Today, I could give you a hundred times this. Tomorrow, a million.”

“Tomorrow?” I ask before my brain catches up with my mouth. Lime just nods. “Then what’s the harm letting me take Robert here?” Lime laughs a laugh like expensive wine made from sour grapes.

“No harm, really. You won’t run to the Corporation- your pride won’t let you- and even if you did, it’s much too late for them to stop us… but on the other hand, you could make things a little tougher for us. We’d rather take them by surprise, you understand; no sense fighting a war when you can win an ambush. It’s just common sense.” His men heft their guns. “I’m afraid I’m going to have to ask you one last time which side you’d like to be on, Detective.”

“If it’s all so inevitable, Lime, why would you even need me?” I see something now I never thought I’d see. I’ve hurt his feelings.

“You’re my friend,” he says simply, “and I’d like you to be a part of this. Sure, we’ve had our scraps- but that was business. You’re a man of the world, Detective, too smart to take your medicine, too moral to work for the Corporation, too proud to become a criminal… I don’t think I know anyone I respect quite so much, except perhaps for her… but then, I actually do hate her, so yes, yes now that I work it all out aloud, I suppose you are my best friend in this whole backwards world.” He’s lonely, and I’d be lying if I tried to convince myself that none of what he said was mutual; it’s why I never offed him back in my Corporation days. We’re two guys too smart to play by the rules, and too dumb to walk away from the game. There’s some camaraderie in that, if not the friendship Lime is shilling.

It’s a rare vulnerable moment for him, and I can see it makes his boys uncomfortable. A smarter detective might be able to come up with a way to use that. But a smarter detective wouldn’t have been here to hear that little revelation in the first place.

“Ah, yeah, I forgot we’re best pals… must be the guns your goons have at my back.” Buying time, and not much of it.

About the Author:
Nick Feldman drinks whiskey and writes books. He lives in Seattle, where the food is good and the men wear confusingly tight jeans. When not writing, Nick enjoys dating destructive women and shouting at the television whenever the Phoenix Suns are on it.