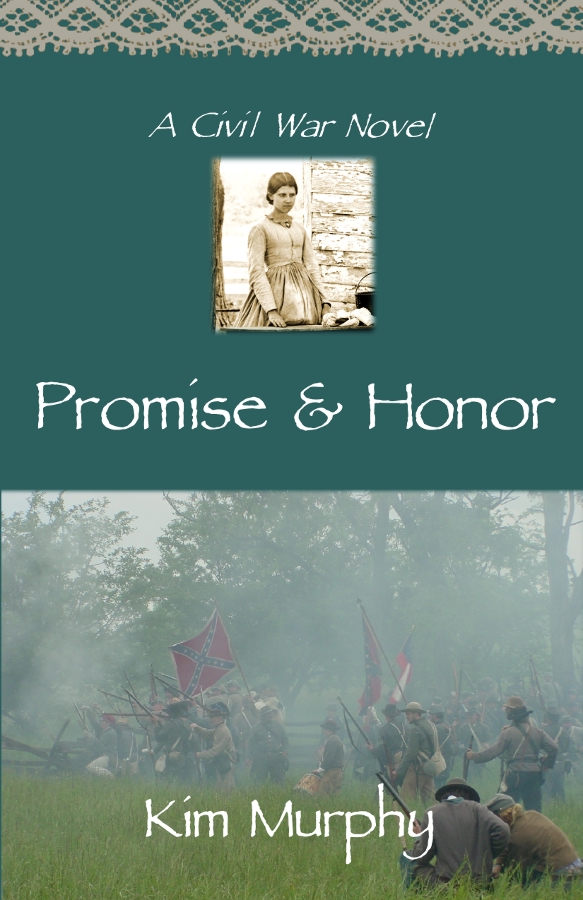 At the outbreak of the Civil War, Amanda Graham’s husband dies a hero’s death. Left with no source of income, she smuggles medical supplies for Lieutenant Colonel William Jackson and the Confederacy. Although a rogue, Wil is a man of courage and fiercely loyal to Amanda. Lieutenant Samuel Prescott, a soldier of honor and former comrade before the war, fights for the Union. As opposing forces move into Virginia, Sam clashes with Wil on more than the battlefield, when both men fall in love with Amanda. Torn by grief and loyalty, Amanda struggles with the harsh reality that her way of life has been altered forever by the growing storm.

What Inspired You to Write Your Book?
I passed a Civil War battlefield that had a cannon and a foundation of an inn. Thankfully, the women and children in the inn made it to safety during a raging battle, but the scene sparked my interest on how the common person survived the horrors of the war.

How Did You Come up With Your Characters?
I truly never know where the characters come from, but in Promise & Honor, I had two friends fighting on opposite sides to show the division of the war. Also, in history books, the women's perspective is often overlooked. How they coped and survived is a story in itself, which is something I wanted to portray.

Book Sample
When the cannon roared to life, spectators sent up a round of
cheers. They had spread checkered cloths and baskets filled with
fried chicken and fine pastries across the grass. Children romped.
Champagne corks popped. Women shielded delicate skin with gaily
colored parasols. Eager to witness the deciding battle, congressmen had
brought their families for a picnic. The first men in blue started falling,
and mouths gaped at an unexpected sight—blood.

Lieutenant Samuel Prescott wiped a sweaty brow in the stifling heat.
Nerves—no, it was the heat. Ader hours of waiting in the relative safety
of the woods, the regiment marched across a blackened field. Charging
men before them had trampled the summer grass. As they advanced,
the spectators applauded and shoved fists to the sky for triumph.

What Sam wouldn’t give for a cool Maine breeze. Through the
smoke all he could clearly see were the feet of the man in front of him.

Guns pounded and ghostly figures rushed here and there. The boys
hustled over a snake–rail fence. One private fell from the top rail,
landed on his canteen, and dented it. The other boys gathered around
and roared with laughter.

Less than amused, Sam failed to share their enthusiasm. Certain
they would see the elephant soon, he shouted for them to keep marching.
At the top of a gentle rise, bullets whirred over their heads. A mass
of dead and dying bodies sprawled across the field below. Rebels fired
from the woods. Without the benefit of cover, many of the boys were
caught in the open as easy targets.

Sam motioned for them to lie low. Minutes of more waiting passed.

When the Rebels formed a line, the spectators finally comprehended
the danger and jammed the road with their carriages in a chaotic retreat.

The order arrived, and Sam shouted for the boys to fall in line. Face
to face—a few hundred yards apart. So this was the enemy. The colonel
signaled with his sword.

“Ready!” Sam commanded as if it was nothing more than a drill.

The men in blue readied their muskets.

Muskets snapped to attention and sighted the targets in gray.

Through the deafening volley, canister whistled overhead and
sprayed the ground with balls of deadly lead. It tore through the ranks,
and a number of men went down.

The Rebels moved toward Sam’s line, and an unearthly yell rose
above the frenzy. In spite of the heat, a chill of cold terror ran down
Sam’s back. He ordered the boys forward.

A sobbing private rammed his musket barrel with bullet ader bullet
without firing. A Rebel shot tore through the boy’s chest, and he fell
dead at Sam’s feet.

The otherworldly yell sounded again, and blue and gray merged in
hand–to–hand combat. Sam briefly thought of Kate. She had died over
a year ago ader giving birth, and he was ready to join her. The ground
rippled beneath him, throwing him oc his feet. He tasted blood in his
mouth and checked himself. His arms and legs were firmly attached.
He appeared to be unharmed.

A cold, sharp blade ripped through his led sleeve and grazed his
arm. A wild–eyed Rebel loomed over him with a raised bayonet ready
for another try. Sam rolled to the side and fired his Colt pistol into the
scraggly bearded face. Blood spattered him, and the faceless Rebel fell.

The blue line gave way. Some boys clutched muskets as if they were
part of them. Others threw down weapons, turning tail.

He needed to get behind them—keep the remaining boys from running.
Regroup the others, and keep the line from breaking. But through
the smoke, the Rebels swarmed their flank like bloodsucking flies.

Sam got to his feet, and a bearded Rebel oecer with a sword in one
hand and a pistol in the other charged toward him. He aimed the gun
at Sam’s head.

At first Sam failed to recognize him, but the gunpowder–blackened
face belonged to Colonel Graham, one of his commanders before the
war. The Colonel’s uniform was covered in blood, and his eyes remained
fixed in the other world of battle.

Sam sucked in his breath. He accepted death, but friends didn’t
meet as enemies on the same bloodstained battlefield. Unable to pull
the trigger, he threw his pistol to the ground in surrender. Ready to die
by the hand of a friend, he straightened to attention. His first battle
would be his last.

Sam’s eyes burned from the smoke, and he blocked out the fear of
death with thoughts of home. A cool ocean breeze blew gently in his
face as he inhaled salt air. He held a glass filled with ice water. Ice was
scarce in Virginia. But Virginia was where he had led his daughter in
the caring hands of the Colonel’s wife, Amanda Graham. Ader Kate’s
death, she had taken his daughter and cared for Rebecca. She would see
to the child’s needs once he was gone.

The fatal bullet didn’t come. Sam looked over at the Colonel as
he lowered his pistol. Friendship registered in his former commander’s
eyes. Between them there was no blue or gray. But sympathy for the
enemy could get a man killed, and the Colonel vanished in a cloud of
smoke.

Cannon pounded, and muskets exploded. The field reeked of gunpowder
and death. Sam retrieved his pistol and took his position at
the end of the line. An exploding shell mufed a scream. Dirt and
gunpowder showered the ground.

Sam shielded his eyes. When the veil lided enough for him to see,
a soldier in blue writhed from a belly wound.

Something struck him square in the ribs, and he was eating dirt
once more. A Rebel swung his musket and struck him in the forehead.
Blinding pain. Not ready to let go, Sam fought to remain conscious.
Willful pride kept him from calling for Kate.

Someone was aiding him. Hands went underneath him and helped
him up. The face was blurred, but he wore gray. When the face came
into focus, Sam was comforted to see a friendly face—Colonel Graham.

The Colonel drew Sam’s arm over a broad shoulder.

The Colonel staggered. His free hand went to his chest. Blood
spurted between his fingers.

The company corporal stood across from them with his mouth
agape. They must be quite a sight. Gray helping blue on the battlefield.
Light narrowed to a dot, and Sam felt the Colonel slump. Small but
strong hands caught Sam before he hit the ground a third time. What
would he tell Amanda? Friends didn’t meet as enemies. Too tired to
think. Then blackness.