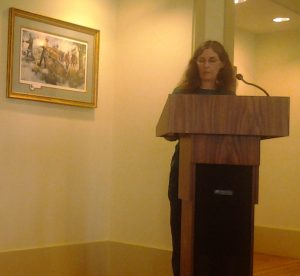 About Kim Murphy:
Award winning author Kim Murphy has always had a love for history, ghosts, and time travel. After moving to Virginia over twenty years ago, she passed a Civil War battlefield that had a cannon and a foundation of an inn. The scene sparked Kim’s interest on how the common person survived the horrors of the war. Her Promise & Honor series is the result.

When she finished her Civil War trilogy, she turned to something a little different by writing a Civil War ghost story. Whispers from the Grave and its sequel, Whispers Through Time, began as a high school English class short story. Though the story has gone through a few incarnations prior to publication, two main characters remain in the final version.

From her research for her fiction, Kim learned that historians incorrectly assumed rape was rare during the Civil War. Seven years of researching and writing went into her only nonfiction title to date, I Had Rather Die: Rape in the Civil War. The title was taken from a rape survivor’s testimony during a court-martial case.

Requiring a break from writing about the Civil War, Kim developed her current Dreaming series, after discovering that Virginia, not Salem was the first to have witch trials on the North American continent. She is currently working on the third book in The Dreaming series, Circle in Time.

What inspires you to write?
The characters and their stories.

Tell us about your writing process.
I’m a seat of the pants writer. I’ve tried outlines, but they never work. The characters have their own ideas, and for me, that’s the fun of the journey.

For Fiction Writers: Do you listen (or talk to) to your characters?
Most definitely. If I don’t, I end up rewriting what I’ve written. As I mentioned in my writing process, the characters have their own ideas on how the story should proceed.

How did you decide how to publish your books?
I’ve worked with other publishers, but for me the best way was to self-publish. I prefer hiring the editors and cover designers myself. My way may not be the right way for other authors. Each individual needs to explore what works best for them.

What do you think about the future of book publishing?
I’m truly uncertain about what the future of publishing will be. I’ve been in the business for 15 years and could have never predicted where we’re at today.