You are here: Home / Fiction / Mystery/Suspense / Portrait of a Dead Guy by Larissa Reinhart 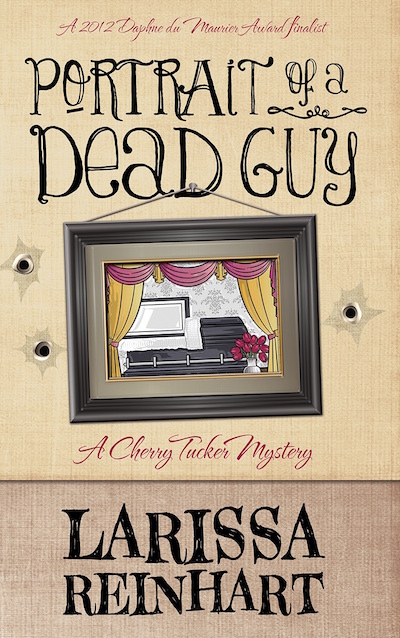 In Halo, Georgia, folks know Cherry Tucker as big in mouth, small in stature, and able to sketch a portrait faster than buckshot rips from a ten gauge — but commissions are scarce. So when the well-heeled Branson family wants to memorialize their murdered son in a coffin portrait, Cherry scrambles to win their patronage from her small town rival. As the clock ticks toward the deadline, Cherry faces more trouble than just a controversial subject. Between ex-boyfriends, her flaky family, an illegal gambling ring, and outwitting a killer on a spree, Cherry finds herself painted into a corner she’ll be lucky to survive.

What Inspired You to Write Your Book?
I had an idea for a redneck artist character when my father suddenly passed. While I was staying with my mother, mourning my dad and I distracted myself by thinking about the characters. If the artist had to paint a coffin portrait for a murdered victim, she could easily get wrapped up into solving the crime. And that's where I knew I had the story.

How Did You Come up With Your Characters?
My character, Cherry Tucker, is a professionally trained artist but a country girl, raised on a farm, and proud of her redneck roots. I liked the contradiction. I'm from a small farming town and I had a background in art and art history. I was listening to a lot of Miranda Lambert at the time and her music inspired the flavor of Cherry Tucker. She's sassy, Southern, and real spitfire, like the characters Miranda Lambert sings about.