You are here: Home / Fiction / Romance / PLEASE FORGIVE ME by PAUL C. STEFFY 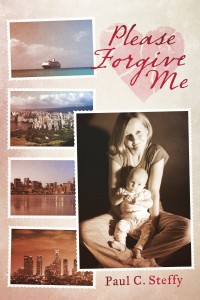 When Geri Sanders was a pregnant, unwed sixteen year old, her parents forced her to give up her beautiful baby for adoption. To placate her strict father, who had to win the family battle with his not-so-favorite oldest daughter, she’s lived thereafter with tormenting guilt and a broken heart. On the day of her baby’s birth, she expected to never see her lovely and healthy boy again.

Five weeks ago, Geri had hired an experienced and well-respected genealogy researcher to delve into her past. She made one final attempt to find her son and invite him back into her life. Three words were on her mind—Please Forgive Me. If needed background information does exist through computer accessible records and paper files references to lost family members may emerge with surprising ease. During pre-internet years, two other family history researchers had told Geri their same sad opinion: the files to locate her son were incomplete or missing. Soon after she’d given up her baby the paper trail stopped; her son’s adopting family had moved, and then, they’d disappeared. Throughout her twenty-eight year marriage, neither Geri’s husband nor her son and two daughters had known of her heartbreaking secret.

Jamie Monroe is a successful single father to his precocious five-year-old daughter. Geri rejoices when, according to the most recent research, Jamie is introduced as her lost son. His young, loving and devoted wife had died one year earlier of what he called, “That damned cancer.” Now, amid his first romance since his wife’s death, he has nagging and persistent doubts about it surviving—until recently, everything about Laura had seemed so perfect.

Later, Jamie meets Lisa, Geri’s lovely and youngest daughter. She’s seven years younger than Jamie. The instant their eyes meet, both of them feel an irresistible attraction between them. Through a slip of the tongue, Lisa learns of her mother’s heartbreaking adoption story. She quickly realizes the true family implications for her and Jamie. Now their possible romance is strictly forbidden. Lisa demands immediate answers from her mother about the adoption. Otherwise, later, when the truth is known, it may destroy the trust Geri’s entire family has for her—what other dark secrets does she hide? Geri knows too, that her newly exposed tragic past places her own unhappy marriage in worse peril. While uncertain possibilities indicate a happy conclusion, will Geri’s youthful troubles finally be resolved?

Can genuine lifelong romantic love between Jamie and Lisa emerge triumphant if they ignore society’s standards? Should Lisa and Jamie remain together regardless of what others think about their rumored genetic connection? Will they stay together, move away and disregard everyone else in their lives? Is Jamie really Geri’s son? After all, should they marry, some family members may still banish them. Click now, and discover the resolution to Geri, Lisa and Jamie’s uncertain future. Locations include, Chicago, Los Angeles, and onboard two cruise ships during separate visits to the magnificent Hawaiian Islands.

What Inspired You to Write Your Book?
This story had to be told. I know of two persons who were adopted. It happened long before the computer was available. Now, with rapid information accessibility it is possible to find children or parents who were separated decades ago.

How Did You Come up With Your Characters?
When I write the characters come to me. I write what I sense and feel. In my stories, they live their own lives.

Book Sample
Women’s cancer as he called it. She was so young, he’d thought many times. Twenty-seven years young, and with a four year old daughter. It isn’t fair. It just isn’t fair to Lisa or me. He’d mulled these thoughts over often, but Jamie kept the words to himself. He didn’t want to be a complainer to his friends or family. He tried to be a model dad, but even he could tell it was wearing on him. Too many details to remember and Lisa needed attention and plenty of quality time. He needed someone to help him, and deep down inside, he truly did want someone to love. For the first ten months after Sharon’s death, he couldn’t imagine that he’d ever want another relationship. Recently though, his thoughts had changed. He kept remembering what Sharon had said to him, as he sat by the bedside in her quiet and peaceful hospice room.
Several times, during her last few weeks, she’d looked at him with her tired, brown, loving eyes and said, “Darling, I want you to find someone else who could be a good wife for you and a stepmother for Lisa. She needs to be loving, caring, and someone who is a worthy stepmother for her. A girl needs to grow up with a mother at her side. She needs to learn about life from her mother and to trust her completely. A mother is someone who says funny things, and laughs with her, and on special days, she helps her to make cookies in the kitchen while she spills flour over the table and floor. Then, when the dough is in the oven, they’d stop and hug, giggle and laugh while they wait to have those warm cookies with a glass of cold milk. A daughter always appreciates doing those little activities with her mother. Those, along with a thousand other things they’ll do through the years, lovingly, together. She’ll remember doing many of them, someday, while she’s busy doing the same things with children of her own—a thought will appear as though an event with her own mother had happened only yesterday. She’ll see herself and her mom engrossed in doing something that brings a smile to her face, and perhaps, tears to her eyes. A mother loves to see the expressions on her daughter’s face on Christmas morning when she tears off the paper and opens her presents. A mother is always there to help her when she’s sick and must stay home from school—even if it means that mom misses a day or two of work. I wanted to help her learn to ride a bicycle and buy her a bathing suit and together, we’d teach her how to swim. At least I did get to help her put on her first Halloween costume last year. She’ll miss my being with her for her graduation from high school and college, and that magic day when she walks down the aisle and you give her away to the boy of her dreams. A dad has his place, but for a little girl growing up a loving, caring mother needs to be there for her every day. Don’t let me down Jamie,” she had said. By this time, her voice sounded tired, weak, and pleading. In Sharon’s heart, she wanted to take the burden of guilt from Jamie’s shoulders. She knew he’d be carrying the full weight of raising Lisa in a matter of a few weeks, or perhaps even days, unless a miracle occurred for her—and miracles were in short supply. Jamie didn’t know when his emotions would allow him to begin dating again. He’d always felt so devoted to Sharon, his exquisite and faithful wife. In the end, somehow, he would fulfill her wishes. Lisa deserves the love of a caring and affectionate stepmother along with her devoted father.

Buy PLEASE FORGIVE ME On Amazon