You are here: Home / Fiction / Science Fiction / Playback Effect by Karen A Wyle 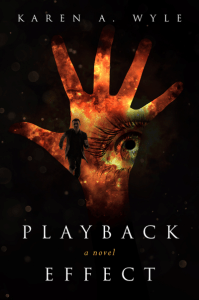 “O wad some Power the giftie gie us/To see oursels as ithers see us!” But what if we could see others as they see themselves?

But such recordings may carry more information than the public has realized. What will criminals learn about their victims? When a husband is wrongfully convicted of injuring his wife, how will their marriage change? And what uses will a sociopath find for recordings of the experience of death?

What Inspired You to Write Your Book?
I’ve always been interested in dreams, and more recently in the idea of “lucid dreaming” (knowing one was dreaming and controlling the content of the dream). That turned out not to be the central idea of the book, but I believe it came first, followed by the idea of recording such dreams, and then the idea of recording and sharing other experience. The idea of making criminals relive the suffering of their victims really intrigued me — though the effect on the criminals, as gradually revealed in the book, did not immediately occur to me.

How Did You Come up With Your Characters?
If you manage to establish a direct line to my subconscious, she might be able to answer this question better than I. . . . There are bits of people I know and love in both Wynne and Hal. I have no idea where Arthur came from, though he may be my favorite character in the book. As for sociopath Tertius Shaw: I’m afraid to ask from whence he sprang.

Book Sample
[Note: this is an excerpt from the middle of Chapter 2.]

The bomb must have been hidden inside the fountain.

The van rounded the corner, wheels screeching, throwing the rookie against the window, and he caught his first glimpse of the devastation. The bronze sculpture at the center, always abstract, had become a nightmare vision of itself, twisting off in every direction, reaching jagged claws toward the chaos around it. The debris of the fountain was littered with an incongruously colorful array of other objects—water bottles, bits of clothing, toys—that had been sucked back toward the center by the vacuum after the blast.

The van pulled up and the driver flung open the door. The rookie shrank back as the wailing and screaming hit him at full volume. A moment later came the odors: the sharp bite of explosive mingled with a stench that might be burnt hair and clothing, and a smell like roasted meat that could only be burnt flesh. And all around lay sprawled and writhing bodies, pools of blood, severed limbs.

For a moment the rookie stood paralyzed, as all around him the more experienced record techs spilled out of the van and got to work. Then, just as they had told him would happen, his training kicked in. He grabbed a case of helmets and looked around. Right away he noticed and tried to ignore the explosive ordnance disposal techs, sweeping the scene for additional bombs. They would do their job; he had his own.

Highest priority were those victims still conscious, yet grievously wounded. The most potent experiences would occur before the emergency medical personnel reached the victim, and he was not allowed to apply the helmet without an EMT or paramedic present—but if he acted quickly, he could get a helmet on before any pain medication kicked in. And the new helmets were supposed to be able to grab a few minutes’ worth of short-term memory.

He needed someone to follow. There were dozens of EMT’s and paramedics on the scene, some doing triage, some tending to those victims already tagged as most urgently in need of help. Close to him lay a woman whose shoulder bore the painted symbol for Second Tier: seriously injured, but likely to survive a few minutes while the First Tier received stabilizing treatment. She would have been given pain medication a while ago. That would not do for his purpose. He trotted over to one of the workers. “Recording team, here and ready. I’m—.”

The woman snorted and turned away, the sound and movement eloquently conveying both anger and contempt. “Vulture squad. Just what we needed.”

“The hell you will. You’ll be grabbing at the victims over my shoulder, shoving helmets on their heads.”

He should have expected this attitude. The police were used to working with recording techs, who hung back until a path to the victim was secure and then rushed in. EMT’s most often dealt with trauma that had no human cause. Unlike the police, they did not normally view themselves as adjuncts to the criminal justice system.

The rookie’s supervisor chose that moment to appear. The rookie wasn’t sure whether to be relieved: he could use the backup, but he doubted he cut an impressive and competent figure just now.

The EMT glared at the new arrival with impressive scorn. “You know exactly what the problem is, but let’s stop wasting time.” She hurried toward a man—well, more of a boy—lying a few yards away, clutching his leg. His thigh. It wasn’t a leg any more, not all of one. The boy seemed to be in the process of regaining consciousness.

The supervisor dug his elbow into the rookie’s ribs and hissed in his ear. “Get on it! He’s about to realize what’s happened to him.”

The rookie gaped. “But when they’re conscious, we’re supposed to try to get consent first—”

“There’s no time! We’ve got to catch the moment when he knows his leg is gone! A memory won’t be as vivid—move!”

The rookie jumped, then scurried over to the boy, approaching him from the side opposite where the EMT was kneeling. He looked quickly at the helmets, grabbed one the right size, then made himself stop and breathe. It was a good thing the helmets were shaped as they were—he could apply one without taking the risk of lifting the boy’s head. As gently as he could, he seated the helmet across the boy’s forehead and hit “Record”. Then he clambered to his feet and stepped back. The EMT’s jaw dropped in shock. “What the hell are you doing?”

The boy reclaimed the EMT’s attention by moaning and muttering something the rookie couldn’t hear. Then came the moment the supervisor had anticipated. The boy struggled up onto one elbow and looked down at himself. Even from the distance to which the rookie had retreated, he could see the boy go pale. “What—did—my leg! My leg!” He turned and gripped the tech hard with one shaking hand. “Can you—is it here, can you find it, can you fix it?”

The rookie turned toward his supervisor, who was almost rubbing his hands in satisfaction. Of course, it wasn’t what it might seem to an ignorant observer. Neither of them was some kind of sadist. They were here to ensure that when the police caught the son of a bitch who had planted the bomb, the bomber could be made to live through something close to the agony he’d caused.

And knowing you’d lost a leg—that was horrible. The victim was just a kid, the age the rookie had been when he was playing high school football. And now? If he was lucky, maybe they’d be able to grow him a new leg, but legs took years, even when everything went well. The kid wouldn’t be whole until long after his football, or whatever, days were over.

Suddenly the supervisor’s expression changed. “What the—get over there and switch it off!”

The rookie’s head whipped back toward the boy. He had collapsed, and the EMT was cursing under her breath, unpacking a portable defibrillator, checking around the boy, applying the device. The rookie froze. If he followed that order, if he went anywhere near the boy, he might somehow be responsible for what was about to happen.

In a few minutes, it was over. He might not have known, even watching the boy shudder, and shudder again, and then slump in final relaxation; but the EMT’s body language told the story. The boy had died.

Had died, with the helmet on “record.”

The rookie looked back at his supervisor. The older man was shaking his head heavily from side to side. “Well, now, don’t we have the hot potato on our hands.”

About the Author:
Karen A. Wyle was born a Connecticut Yankee, but moved every few years throughout her childhood and adolescence. After college in California, law school in Massachusetts, and a mercifully short stint in a large San Francisco law firm, she moved to Los Angeles. There she met her husband, who hates L.A. They eventually settled in Bloomington, Indiana, home of Indiana University.

Wyle has been a voracious and compulsive reader as long as she can remember. She majored in English and American Literature major at Stanford University, which suited her, although she has in recent years developed some doubts about whether studying literature is, for most people, a good preparation for enjoying it. She has been reading science fiction for several decades, but also gobbles up character-driven mysteries and historical fiction, with the occasional foray into anything from chick lit to military history.

Wyle’s voice is the product of almost five decades of reading both literary and genre fiction. It is no doubt also influenced, although she hopes not fatally tainted, by her years of practicing appellate law. Her personal history has led her to focus on often-intertwined themes of family, communication, the impossibility of controlling events, and the persistence of unfinished business.

Wyle and her husband have two essentially-grown and wildly creative daughters, as well as a sweet but neurotic dog.