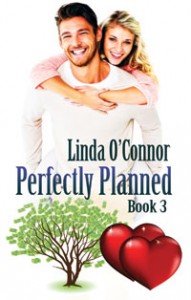 She’s got it all Perfectly Planned . . .

Chloe Keay is on the hunt for the perfect sperm donor, but who knew it would be this hard? So many things to consider in a father – sure height and hair color are important, but what about the real issues. How does he feel about bagpipe music? Does he buy the extended warranty? Skittles or M&Ms? She doesn’t want an average Joe. She’s narrowed it down to two candidates and has the perfect plan to pick the heir and the spare.

Staff Sergeant Rip Logan, head of the elite Tactics and Rescue Unit, has a gut feeling that Chloe Keay is trouble. She’s a sexy little spark plug who radiates innocence, but it doesn’t jibe with her suspicious behavior and probing questions. The fact that he’s attracted irritates him. What exactly is she after? And should he go with his gut or follow his heart?

Planning for love – what could possibly go wrong?

What Inspired You to Write Your Book?
Perfectly Planned is Book 3 in the Perfectly Series. When I wrote the first book, Perfectly Honest, I knew I wanted to have more books in the series that would be based on spin-off characters from the first. In the first book, Chloe has an accident and that’s what starts the cascade of events for Mikaela and Sam. In Perfectly Reasonable, Book 2, Chloe shows up more often because she works with Margo. During one of their breaks, Chloe mentions that she’s looking for a sperm donor – and the premise for the third book was born!

How Did You Come up With Your Characters?
I wanted Chloe to have a completely different personality from Mikaela and Margo, the characters in Books 1 and 2. Her ideas are a little bit out there, but she has a heart of gold. She also does something which is just a little outside of the law, so I thought it would be fun to have her fall in love with someone who has a serious job and follows the law to a tee – a police officer on the Tactics and Rescue Team. Before I can write a story, I need to nail down the characters’ names. I was ready to start, but was having trouble coming up with the male character’s name. I went to a Zumba class and told myself that by the end of the morning I had to pick a name. At the gym there are banners of the different classes that are offered – Zumba, Synergy, Step and Rip classes. I thought hmm, Rip, what a perfect name!

That was easy. Chloe Keay spun around in the office chair and smiled. Thank you, social media. Two new friends and plans for Friday night. How productive.

Her mouse hovered over her profile picture. She probably should update it. A year ago her hair had been flaming red. Gave her a homey Anne-of-Green-Gables look. Without the freckles. Or the pigtails. Or the round face and green eyes. She laughed. Yeah, she was nothing like Anne of Green Gables, but she had thought it suited Roger. She had been going for a wholesome ‘let’s start a family and settle by the water’ kind of look. Turns out Roger was more of a ‘live in a condo, travel, never have kids’ kind of guy.

She shrugged. Didn’t matter. She didn’t need to impress anyone or send out a mating signal. She was done with all that.

Her thirtieth birthday was on the horizon, and the future was making history.

She had listened to the financial news every morning with Roger. (The relationship wasn’t all a waste.) Not that she really cared about Dowel Jones, whoever he was, or the Toronto sock exchange (Really? Socks cost two dollars, buy new ones), but there was only so much chatter about painting you could do. Said Roger. She could chatter about painting all day. That’s pretty much what she did. And now that her boss, Margo MacMillan, a.k.a. Sweetheart Smarty-pants, was back with a stethoscope around her neck after a year of painting full- time, Chloe talked about it even more. Homes, hotels, warehouses, any wall, any color, it all worked for her.

But with all the financial advice she was catching up on, she did notice one thing. The population was aging (Someone’s just figuring that out?) and there wasn’t going to be enough money in the pension plan. Hmmm. Apparently that was a problem. And not that she liked to think too far into the future, but it seemed you needed a retirement plan.

Not only was it ‘highly recommended,’ but, they stressed several days in a row, it had to be started by age thirty. Hmmm. Retirement plan at age thirty, who’d have thought?

Well, if that’s what kept the big bean counters from Money Market News up at night, she’d better sit up and listen.

She never had to worry about what to do with her ‘disposable income.’ Sheez. She disposed of it. It wasn’t that hard. (She should do a podcast or two for them.) “Don’t spend what you don’t have,” her mom always said. “Debt isn’t your friend,” her dad would chip in.

Her parents, sixty-nine, turning seventy in a week, shared the same birthday and the same financial vision. They were thrifty, but knew they needed more. Their retirement plan was simple—have six children. There was bound to be a high achiever among them.

They were right. Dale, the eldest, was a lawyer. Pamela, number two, a nurse. Devon, number three, a dentist. April was an electrical engineer. She painted houses and Cory, her twin, was a plumber.

For pretty much everything her parents needed, from house repairs to health questions, they had a child on speed-dial. And bonus, funds flowed freely to pay for their place in a retirement home.

That’s the kind of retirement plan she was after. Maybe not six kids. Six was a bit of a handful, especially flying solo. But she could handle one, at least to begin with.

It would’ve been easier with Roger, but oh well, on to Plan B.

She had been poked and prodded and deemed a healthy receptacle.

But, oh how to choose which little swimmers to let loose? She needed smart (had to earn the big bucks), features similar to hers (hair color notwithstanding), family oriented (obviously had to love their momma), and not too nasally a voice (very annoying). They needed to be screened for reverse traits—ones that would make her wish she could reverse the whole process.

She needed more than the measly amount of info available online.

No problem. She had applied for a job as a weekend receptionist at the sperm bank, interviewed quite successfully (naturally), and waited patiently while they narrowed down their selection.

She had started three weeks ago.

The job was straightforward, certainly not as creative as painting. In fact, it was kinda slow. She liked the music in the waiting room, though, especially with her mouse clicking. She could get quite a beat going. Left click. Right click. Left-right-right click. She could see it catching on. In fact, it should be posted on YouTube because it’d give her something to watch at work, too.

She hadn’t lost sight of her plan, but it wasn’t obvious where all the data was stored. She had opened several files, but it wasn’t until she rocked and clicked to The Jaded Gentlemen, that lo and behold, the folder popped up.

Now, she wasn’t a computer genius or anything, but who uses 1234 as their password? You’d think all that confidential information about sperm donors would be behind a bigger firewall. Nope.

So, her two top matches now had names.
4652. Ripley Logan
2485. Jared Clayton
A few social media clicks later, and voilà, she set up friend requests with both. Even better, it looked like Ripley’s baseball team had a rain-date game on Friday, seven o’clock, right here in Rivermede at Fairfield Park.

He was sporty. She clicked a happy beat.

She could go to the game and check him out. Try to learn more about him, but keep it quiet, fly under the radar.

She spun around in her chair and smiled. Perfect.

Looking back at the screen, she hovered the cursor over her profile picture. Redhead or blond?

What did that financial guru say? Plan carefully, go slowly, get the core established before exploring any specific tactical shifts.

Hmmm. Sounded like the redheaded photo should stay a little longer.