You are here: Home / Bargains and Freebies / Bargain Books Under $3 / Orville Mouse and the Puzzle of the Clockwork Glowbirds by Tom Hoffman 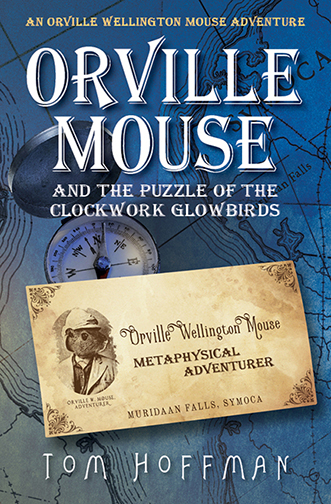 2016 Gold Medal Winner • Best Young Adult Adventure Book
Readers Favorite International Book Award
“Hoffman comes across as a master in the teen fantasy genre…” –Romuald Dzemo
“…magical, exciting, witty and wise…” –Jack Magnus
Orville Wellington Mouse lives with his Mum in the quiet fishing village of Muridaan Falls, Symoca. His life takes an unexpected turn when he learns his best friend Sophia Mouse is not only from another planet, but is also a member of the Shapers Guild, a group of powerful mice who are able to convert their thoughts into physical objects.

When Orville notices a group of seven glowbirds exhibiting rather extraordinary behavior, he and Sophia attempt to uncover the origin of the unusual birds but soon find themselves enmeshed in a fiendish plot to embroil Symoca in a horrific war. Captured by the powerful and mysterious Red Mouse, the two adventurers are hurled through a spectral door into the terrifying world of Periculum, home of the dreaded giant carnivorous centipedes.

With help from the secretive Metaphysical Adventurers, Proto the Rabbiton, the Mad Mouse of Muridaan, a gigantic Gnorli bird, some ghostly Anarkkian warriors, and the enigmatic Monks of the Blue Robe, Orville and Sophia must find their way home and stop the evil Red Mouse before he destroys Symoca.

What Inspired You to Write Your Book?
The Bartholomew the Adventurer Trilogy and the Orville Wellington Mouse adventures are multi-leveled stories and have been compared to Chronicles of Narnia, The Hobbit, Neverending Story, etc. The books have underlying themes of ethics, metaphysics, philosophy, quantum physics, and spirituality. A common theme is the idea that there is no magic, only science we don't understand. I am 65 years old and have spent my life studying all these topics. I have a degree in psychology from Georgetown University. The books were written to provide a different way to view the world we live in. To see all life as a single force, all life equally precious, no matter the form. A world where violence is not necessary, a world where the protragonists walk of their own accord into the ferocious fires of life and are changed forever by their difficult choices, by their own sacrifices. A world of empathy, kindness, and love. And of course, ten foot tall ancient robotic rabbits and gigantic carnivorous centipedes living on post apocalyptic planets!

How Did You Come up With Your Characters?
Characters are created on an as-needed basis. For instance, in the first book of the Bartholomew the Adventurer Trilogy, Bartholomew is a self-absorbed rabbit searching for a missing object which he cannot name or describe. As it turns out he has a great natural talent for something called 'shaping", or creating physical objects using the power of the mind. The mind is not the physical brain, but is the deeper part of us which exists outside of space and time. On the surface, this would be called magic. I needed a scientist as a counterpart to Bartholomew, so along came Oliver T. Rabbit, Director of Research and Material Acquisitions at the Excelsior Electro-Vacuumator Corporation. Oliver T. Rabbit comes to see the world as a far more complex place than he had originally thought. He also comes to understand the science behind shaping and many other mystical skills. All my characters serve a purpose, they are the archetypes found in all good stories. There are no humans in my books, the world of Bartholomew and Orville is Earth in the distant future, long after humans are gone. Non-human characters like rabbits, mice, rats, robots, and alien forces allow me to discuss a great number of social issues without people taking it personally. It is a way to view human nature objectively. These books are are incredibly fun to write. The characters become a force of their own and I simply watch and listen and record their adventures.

A gentle breeze carried the delicate fragrance of ten thousand newly bloomed orange blossoms across the balmy summer air. It was far too early in the season for the trees to be bearing fruit, but the intoxicating scent of the blossoms floating through the grove was more than enough to satisfy Orville Wellington Mouse. Besides, strolling alongside Orville beneath a gloriously radiant summer sun was his best friend in the world, Sophia Mouse, and that alone made him supremely happy.
Sophia had moved to Muridaan Falls only one year ago, dropping like a bossy know-it-all gift from above into Orville’s life. He was drawn to her immediately, even though at first blush it would seem the two mice had little or nothing in common.
“Isn’t this an amazing place, Sophia? I could sit under this lovely orange tree for a hundred years and dream my life away.”
“I wish there were oranges on the trees. The blossoms smell nice, but I’m hungry, and we only get oranges in Muridaan Falls in the summertime when the train can get through the mountain pass.”
“That’s quite true of course, but doesn’t this seem like an exquisitely magical world to you? You know, enchanting and the like?”
“And the like? Are you trying to sound smart? I guess it’s kind of enchanting. Hey, look at that monster tree over there. That is huge, and it has bright blue leaves. I’ve never seen a tree that big, not even back on Quintari, and they have some colossal trees there.”
Sophia was always comparing Muridaan Falls to her former home on the planet Quintari. Most of the time Orville didn’t mind, but he liked Muridaan Falls just as it was and sometimes the things Sophia said bothered him just a little bit. Of course he never said anything to her because Sophia was his best friend in the world and the very last thing he wanted to do was hurt her feelings. Besides, when he thought about it there was nothing wrong with being proud of where you came from.
“Creekers, I never noticed that tree before. Look at the size of it! It has to be at least a thousand feet tall and five hundred feet wide. Look at all the glowbirds, chirping and tweeting. There must be a hundred of them just on that one branch.”
Orville and Sophia made their way out of the picturesque orange grove and over to the enormous tree.
“What kind of tree do you think it is?”
“I don’t know. I don’t recognize the leaves. It doesn’t look like anything I’m familiar with on Earth or on Quintari. The leaves are sky blue and form perfect circles. I’ve never seen a tree like this before, and I know a lot about trees.”
Sophia plucked one of the leaves from the tree and examined it, then held it out for Orville to inspect. She gazed at Orville for a moment, then grinned and said, “Hey, I bet you can’t do this.” There was a blink of light and a fat juicy orange appeared in her paw.
“Creekers! How did you do that? You made an orange pop out of nowhere! That’s incredible!”
Sophia laughed and gave him the orange. “It’s just a little gift from the universe for my best friend in the world.”
“Thanks, we can share it. It looks delicious. Really though, how did you do that?” Orville glanced up at Sophia. He could see her mouth moving, but instead of hearing her answer he was hearing a loud, irritating rattling noise. “What is that noise? Do you hear it? It’s driving me crazy.”
And then, in less than a blink Orville Wellington Mouse was back in his bed listening to his window rattle wildly in the roaring north wind that screamed down from the towering snow-covered peaks surrounding Muridaan Falls.