You are here: Home / Bargains and Freebies / Bargain Books Under $3 / Night Terror by Jeff Gunhus @jeffgunhus

Ten years after her abduction and near-sacrifice to the Source, Sarah Tremont struggles to be a normal teenager. As much as she’s tried to suppress the power inside of her, it’s grown dangerously strong and has drawn the attention of those who want to possess her power for themselves.

The nightmare that she thought was long over starts again as powerful forces descend upon Prescott City to seek her out. With her parents and Joseph Lonetree’s help, Sarah must stand up to an evil much more powerful than the one she faced in the caves a decade earlier. But in the end, she greatest terror might come from what’s inside of her. 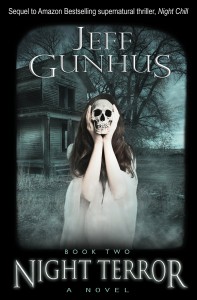 About the Author:
Jeff Gunhus is the author of the Middle Grade/YA series The Templar Chronicles. The first book, Jack Templar Monster Hunter, was written in an effort to get his reluctant reader eleven-year old son excited about reading. It worked and a new series was born. Jeff is also the co-CEO of a national company with over 4,000 employees that has been featured in national media for its unique opportunity for college students to learn entrepreneurial skills. He is the author of the motivational career guides No Parachute Required (Hyperion) and Wake Up Call (Seven Guns Press). After his experience with his son, he is passionate about helping parents reach young reluctant readers and is active in child literacy issues. As a father of five, he leads an active lifestyle in Maryland with his wife Nicole by trying to constantly keep up with his kids. In rare moments of quiet, he can be found in the back of the City Dock Cafe in Annapolis working on his next novel.