You are here: Home / Children and Young Adult Books / Nicu – The Littlest Vampire in ‘Fangless’ by Elias Zapple 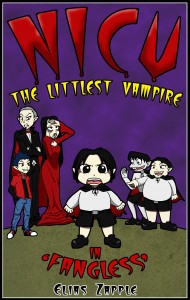 In a spooky house deep in the mountains of Transylvania lives Nicu, a fangless vampire. Yes, that’s right, fangless! Teased by his friends, taunted by his big brother and almost disowned by his parents, Nicu will do anything he can to get his fangs and beat the bullies.

What Inspired You to Write Your Book?
As I was out one night in my cabbage patch launching cabbages at my neighbour, Dieter I caught sight of a bat which made me wonder about them, vampires and sparrows. The bat was alone and it got me thinking. What if the bat had no friends or was being bullied by other bats. Nicu – The Littlest Vampire was then born.

How Did You Come up With Your Characters?
That bat inspired me to come up with Nicu and when I saw a sparrow a day or so later it made Nicu complete, as Nicu often struggles to turn into a bat and sometimes turns into a sparrow.

Book Sample
1
Romania
In Eastern Europe there’s a country called Romania, and in Romania there’s a region called Transylvania. In the south and east of Transylvania there are mountains called the Carpathian Mountains, and in the deepest darkest valley of the Carpathian Mountains, surrounded by tall dead trees without a leaf to be found, there’s a house.
This was no ordinary house like you or I live in. This was a dark, crooked and grim-looking house, with grime, dust and cobwebs all over it, and indeed, in it. This house also had no doors, as the occupants did not need doors. For all they needed were windows to fly in and out of.
Now unless you just picked up or downloaded this book without somehow looking at the title and jumped to this bit, then perhaps you would assume that this house was occupied by birds, or by people trying to be a bit different. You’d be wrong. For this house was occupied by a family of vampires, and every night these vampires would turn into bats and fly out of the windows in search of humans, so that they could drink the humans’ blood and satisfy their hunger.