You are here: Home / Fiction / Action & Adventure / Nap of the Earth by George Robinson & Janice Moulton 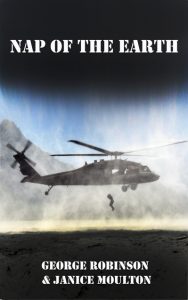 A female helicopter pilot becomes a suspect in thefts of depleted uranium armor-piercing ammo from a US Army post in Germany. When some of the ammunition is used in ethnic uprisings in Estonia, relations between the US and the European Union deteriorate. One of her friends dies in a suspicious auto accident, another kills himself. Army CID arrests her and after polygraph interrogation, she is inexplicably released. She gets caught between Army investigators and the arms dealers who threaten her and demand the rest of the missing ammunition. Unfortunately, she knows exactly where it is.

What Inspired You to Write Your Book?
We had family members and friends who were living where the novel was set and who shared the professional and personal lives of some of our characters. Actually spending time in each of the locations and sharing the experiences our our fictional characters inspired us. While we were staying in Germany, several “interesting” things like ethnic uprisings and illegal arms sales happened that suggested elements of our plot. And having many contacts who could answer our questions and provide information was both a means to make the background and context accurate and was itself an inspiration.

How Did You Come up With Your Characters?
Some of our characters are modeled on people we know, some are compilations and some are purely imaginary. We tried our best to maintain consistent points of view and to make what each character knew and felt coherent and appropriate. And after they came alive in our imaginations the characters continued to develop themselves.

“Verdammt, Frieda! Turn down the sound or I smash the fucking television.”

How could he concentrate on the account books with that stupid racket? This was no time to make a mistake. The farm was not doing well. Last year those pigs at the sugar works offered less money, pretending the yield from his beets was down to sixteen percent. And this year fertilizer prices were going through the roof and no rain had fallen in weeks.

He pulled off the reading glasses and went to the pantry for a bottle of Reichelbräu. As he was reaching for the wall switch he saw it—through the window, lights in the north corner of the field near the road. Two bright specks that moved in a sinusoidal pattern. He knew what it was; this wasn’t the first time—the headlamps of a vehicle driving across the furrowed rows of his newly planted beet field.

“Those fucking Gypsies. They think because we are not in Würzburg they can platz their filthy caravan in my field. We will see about that.”

He stormed back to the parlor, opened the closet and began flinging coats onto the floor.

“Willi, have you become crazy? I hope you are going to clean up that mess.”

“That is for damn certain. I will clean it up for good. Those bastards think they can drive all over my beets. Well, this time I show them.”

The old double-barreled shotgun was in a canvas bag at the back of the closet. At the bottom of the bag were several shells loaded with 2-millimeter birdshot. He broke the gun, inserted two of the shells and put another two in his pocket.

“What are you doing with that shotgun at this time of night?”

He stood and crooked the scattergun over his forearm. “They are here again. In my beet field. The fucking gypsies. I have had enough of them.” He patted the shotgun barrels.

“Willi, you are an idiot. Telephone to the police. It is their job to do this.”

He turned, one hand on the doorknob. “Like last time? They do not come here quickly, these young policemen from the city. Tomorrow morning it will be too late; the gypsies leave before the sun comes up. No, this time I show the bastards.”

The flinty smell of dust from the dry soil made his anger grow, as if the gypsies had prevented the rain from nurturing his seedlings. In the moonlight he could see them, three of them, out of their van now, a smaller vehicle than last time, as if that made it any less damaging to the plants they had driven over. They were moving something away from the van, a fat cylinder mounted on a stand of some kind. Maybe a cook stove, he thought, until he saw two more of the same devices being set up. Well, he’d put a stop to that nonsense, whatever they were doing. He considered firing the shotgun now to frighten them away, but no, it would be better to do it close to them, only another two hundred meters to go. His foot struck an old sugar beet, disinterred by some animal. He stopped and pushed it into the dust with his boot.

Then, above each cylinder appeared a shaft of dark red, like a beam from a shrouded flashlight. They would have been invisible except for the cloud of dust stirred up by the van, dust that would settle on the new leaves of the sugar beet plants and choke them. “Oh those bastards, what they do to my plantings, I fix them good.”

He could hear the engine of their van now, still running. That puzzled him, unless they were using the alternator to power those stupid red lamps. One of the gypsies was smaller than the other two, a child maybe or it could be a woman except the hair was very short. Blond, not the usual color for a gypsy, but even those people were bleaching the hair. The other two were looking up into the sky. And then the red lights made sense. It was a signal to an aircraft.

The engine from the van must be why they did not hear him approach. He was close now, maybe ten meters. He raised the shotgun and fired into the air. Two of the gypsies dove for the ground leaving the fat one standing alone.
“Heraus! Zigeuner Schaum!” He broke the shotgun and replaced the spent shell. The fat gypsy raised his hands; the others must still be cowering on the ground. He walked closer.

Something jabbed him in the side of the neck and he heard a click, a sound he recognized.
“Die Schrotflinte. Lass das.” The voice close to his ear was a harsh whisper, the accent from the North, educated, but menacing. He allowed the shotgun to slip to the ground. A hand on his back pushed him forward. He walked toward the front of the van. The pressure on his neck was gone but the pistol must be aimed at his back.

He was frightened now. This was not how it was supposed to be. He felt his heart beating, the sound of it becoming louder but, no, the sound was coming from the sky. The other gypsy rose from the ground, a tall man, dressed in a suit. The man pointed at him. He spoke English, not that Slavic gibberish. “Jesus Christ, Winnie, what are we going to with him?”

The voice behind him began to reply in English. A woman’s voice. He turned and she stopped speaking. Her face was a German face, certainly no gypsy, a beautiful face, the short blond hair a glowing halo in the headlamps. She looked at him and shook her head. In German she said, “You should not have turned around, my friend.”

There was a push on his chest followed by a noise. No pain, just a sucking feeling, a cold vacuum that pulled the marrow from his legs until he was on the ground. The beating sound from the sky was louder now and there was a light above him, a dark red light like the ones pointing upward. And a wind came down from the heavens pushing him into the dusty soil as the sound and the lights faded and the only sensation remaining was the lump of an old sugar beet pressing into his shoulder blade until even that disappeared.

Buy Nap of the Earth On Amazon