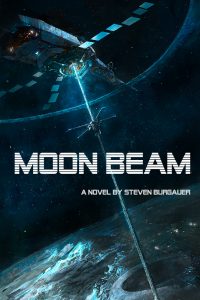 Peril stalked the corridors of the lunar habitat. Fear was its companion. The killer, a woman, fed on that fear. No one in the lunar station was safe from her wrath, not even the fresh, young team that had just arrived from Earth to erect the first lunar space elevator. When completed, the space elevator was destined to be one of the great engineering projects of all time. The unreeling of the space cable had just begun, when the killer struck a vengeful blow.

Now, with a catastrophic solar flare flashing overhead, the race was on.

Can Chief Clay Flynn and Senior Tech Lou Santini stop her before it was too late? Can they save the lives of the men, women, and children of the Lunar Station and its life-sustaining resources from total annihilation?

What Inspired You to Write Your Book?
Aside from science fiction being forward-looking and historical fiction being backward-looking, they are more similar than you may think, especially when you consider the type of science-based science fiction that I write. This may come as a bit of a surprise to some readers, but it is true. Exhaustive, in-depth research is the common denominator between the two. When an author writes science fiction of the fantasy stripe, there are no rules of physics to obey. Magic trumps Sir Isaac Newton and all that. The writer can have a flying horse with wings simply by invoking magic and mysticism and by spreading around enough fairy dust. But to achieve a flying horse when one writes hard science fiction, the author has to invoke physics and genetic manipulation, perhaps biological implants. Two very different worlds. If I were to research the physics of a genetically modified horse, it would entail hours of careful study and consideration. The same is true of historical fiction. If a German national had to surreptitiously make his way from Nazi Germany across the ocean to New Orleans during World War II, how would he do that? What route would he take? How long would the trip take? Would he fly? Take a boat? Seek passage aboard a U-boat? These are questions not easily answered at a distance of 75 years in the past.

How Did You Come up With Your Characters?
My characters are people I see everyday, the waitress who serves me lunch, the guy who repairs my A/C, my children, my wife, my grandchildren, these are where I find my characters.

Book Sample
The woman sat, half-naked, shivering in the cold, sterile air of the lunar habitat.

She sat, legs crossed, finger poised on the trigger of her automatic pistol. Her gaze was fixed, her hand steady. The barrel of the snub-nosed weapon was pressed firmly against the taut flesh of her right temple, its metal rim carving out a round indentation in her throbbing, tension-filled skin.

The woman had a wild look in her eyes. Flaming red hair. Strong, muscular arms. Savage, feral eyes. Bone-handled hunting knife sheathed at her waist. Tattoo of a rising Phoenix splayed in full color across her neck, shoulder, and upper arm.

This was not the first time the woman had been here, in this desolate place, on the cusp of ending her life with a bullet to the head.

She found that it took a lot of nerve to end one’s life, more than she cared to admit. Each time before, when the gun had been in her hand pressed up against the side of her head, doubts had crept in.

Was this really how she wanted to end it? Or would she be leaving behind unfinished business?

That’s when she decided — Revenge first, suicide after.

Once she had her revenge, then she could dictate the terms of her own demise and finally put an end to her wretched life.