You are here: Home / Fiction / Mystery/Suspense / Monarchs and Mendicants by Dan Groat 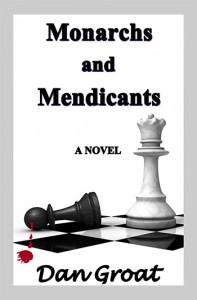 Beware of a man who has nothing to lose.

A Navy Seal suffering from PTSD and a painful past returns to St. Louis from Afghanistan and loses everything. Homeless, he wants only to find work and be left alone, but he is drawn into a group of street people who are being hunted by a serial killer and used by the local mob boss. To save himself, he must fight his way from tragedy to triumph and lead his “friends” on a journey from despair to hope.

In a mystery with heavy literary leanings, you will be reminded why no one wants to make eye contact with a beggar, but you will also discover that if you do it often enough, you may eventually stare into the soul of a king, for greatness is as often concealed by the robes of monarchs as it is by the rags of mendicants.

Walk the broken sidewalks leading through the middle of a struggle between individualism and collectivism where a society with too many followers can only be saved by a courageous, yet reluctant, leader. Monarchs and Mendicants is today’s political adventure dragged down to the gritty, personal level of the streets and alleys of an urban area. Its theme of honoring the individual not only embraces the substance of the American psyche but gives voice to man’s constant longing for independence.

What Inspired You to Write Your Book?
A friend of mine volunteers at a church that does work with the homeless. I became interested in the people he described, the real people who were behind the faces, the faces no one wanted to look at. I watched documentaries that focused on individuals who were a part of the urban street people. My inspiration was a desire to give humanity to that invisible population.

How Did You Come up With Your Characters?
My protagonist, Gifford Ulrich, is a combination of a militarily trained tough guy and the brooding philosopher that sometimes lives within me. I invented someone whose skin I would enjoy living within, if not permanently, for a time, someone who identifies a problem and sets about solving it.
The character who goes by the name, Stephen Sienna, is the group-outlook flipside of Ulrich’s individualism, a caring friend who frustrates Giff’s emotional dilemmas by providing more questions than answers. He is my effort to represent a liberal society’s effect on a strong traditional individual.
Edward, the mentally unbalanced oracle of the streets, is my desire to discover a genius mentor whose message often requires translation.
Pieces of these types of characters have so far appeared in all my writings, my concepts of God the Father, God the Son, and God the Holy Spirit within a man, all three walking the earth.

Book Sample
Death was an old acquaintance.
They had met before.
They were not friends.
Not enemies, either.
They knew each other only well enough to nod in passing.
It was an unpleasant nod.
No hate. No fear.
Nothing but uneasy recognition.
In their past meetings,
he had spoken with whispers, with screams.
He was certain he had nothing else to say.
Gifford Ulrich didn’t know the distance from despair to hope, but he knew hope didn’t sleep in alleys. On this morning his first waking moments were filled with the audible lamenting breath of having survived another winter night on the streets of St. Louis, those onerous recurring sighs that had become his respiration. Endurance was not an uplifting miracle to him, but a depressing fact. Not the surprise, “Hallelujah, I’m alive,” but the admission, “Oh, I’m still here.”
He sat up on the cold, hard cobblestones under the leaned-back lid of a dumpster that he had propped just right on the limestone window sill so that it wedged in the corner of the brick outcropping of the building making a roofed and dry shelter. Missing two wheels, his refuge was impossible to move. Somewhat safe. He had to climb over to get behind it, and it had his mark on it, the skeleton key he had scratched into its rusty sides with his knife, the same skeleton key that was tattooed on his inner forearm just above the left wrist and the hand that was missing half the little finger. It was his dumpster, claimed as completely by his hobo brand as the number on his door had once declared his apartment or the Navy ID tags had labeled his body when the mission allowed him to wear them.
His morning habit was to push the cover back to its rest on top of the container, hoist himself up on it and jump into the day. The heavier-than-usual lid gave away its weighty secret as it clanged down and whooshed snow inside his overcoat and down the neck of his hooded sweatshirt all the way inside his shirt until he smashed its white cold against his skin with his gloved hand.
He dropped into a smothering layer of fraudulent beauty on the floor of the alley. As he shivered his way toward the street with his belongings on his sore back, he wondered how far from one of these downtown St. Louis alleys he would need to travel to find the true allure he had felt walking on that soft white blanket as a child.

Buy Monarchs and Mendicants On Amazon