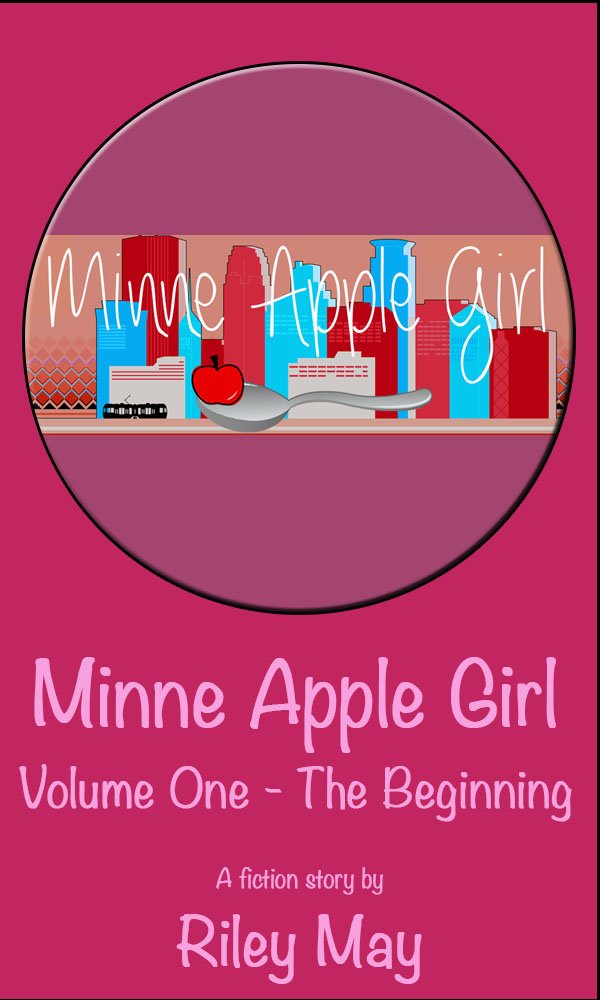 Minne Apple Girl is a fictional chick lit blog written by Riley May. The story centers around Maddie, who recently moved from NYC to Minneapolis – hence the name Minne Apple. Maddie is a city girl, through and through, and is a bit hesitant to move to Minneapolis though finally agrees to do so at the urging of her best friend and cousin, Jessie. Follow Maddie’s story as she learns to adjust to a new city, make friends, start dating, and try to figure out her way in the world.

This is a compilation of the first 3 months of the blog, posted from January 7 – April 4, 2014. Want to see what’s happened since then? Check it out at http://minneapplegirl.com/

A new chapter of the story is posted every Monday, Wednesday, and Friday.

What Inspired You to Write Your Book?
I wanted to improve my writing skills, and I read some pretty amazing other fiction blogs. It really got me excited!

Book Sample
Saturday night, Jessie and I broke out the wine and started putting on our makeup and doing our hair. Around 7pm, Katy text and said she was on the ground floor. Once I committed to going out, I had texted her and asked if she wanted to join us. I was a little nervous, as I didn’t know her that well, but I was determined to make a friend here and I liked Katy a lot.

Letting her in, Jessie poured her a glass of Chardonnay. “So, tonight we’re going to get Maddie on the town here, and show her what we’re working with in Minneapolis. She needs this after her week.”

After hearing Jessie and I fill her in on the job and note from Kyle, Katy shook her head. “Oh, I totally get what you’re going through. I had such a hard time getting over someone myself this summer. We weren’t serious like you two, but I thought we really had something going together. After we broke it off, I would obsessively check his Twitter, “accidentally” send him a text message, try to bump into him, you name it.”

Hearing more about Katy’s experience made me feel a bit better. While of course I knew I wasn’t the only one getting over a breakup in the world, sometimes it felt like it. We exchanged stories about exes, friends, and celebrity crushes. We all agreed on George Clooney, but “Bruno Mars? He looks like he’s 17!” I exclaimed to Jessie

“He’s 28! It’s not like I said Justin Bieber!” She defended herself, blushing.

We finished up the bottle of wine then grabbed a cab downtown. Asking on the way where we were headed, Katy laughed at my question.

“I think the selection may not be what you’re used to. We have a few different types – classy places, meat markets, dance clubs, and indie places, and 2 areas of town people go out in – downtown and Uptown. Generally people rotate through 3-4 different places each night since they are all walkable distance.”

Huh. Normally when we went out in NYC we stuck with one place each night, but this could be fun. Already 2 glasses of wine in, we hit the first place, called The Avenue. We sat in the corner of the small lounge where we could see everything that was going on. The vibe of the lounge was chill, and for the first time that evening I was really grateful to have gotten out for the night.

“Know what girls? This was a great idea. I’m too young to sit around every weekend and mope!” We all clinked our glasses together. “To moving onward and upward!” Katy cheered and we all sipped our drinks.

Another drink in, and I was feeling more sociable by the second. “Katy, didn’t you say people hop around to different places? Let’s go see what else is out there!”

We made our way into the next club, where we waited in line to get our IDs checked.

“No cover charge?” I asked.

“Nope! For some reason, the more the cover charge, the trashier the place. That’s my theory at least.”
Katy said as we made our way to the elevator bank.

Going up to the 25th floor, we walked into a swanky bar with floor to ceiling windows on every side. The space was divided into little rooms, with most resembling small intimate libraries with plush seats and couches

Nabbing seats next to the window as a few people got up to leave, we ordered another round.

“Beats moping around the house, doesn’t it?” Jessie asked as we sipped our drinks.

“Yes, and thank you for making me get out. You were right, it’s exactly what I needed.” I thanked her gratefully.

“Ok, ladies, the view is great and all, but we need to get downstairs where the men are because we’re not meeting any sitting around here by ourselves! Let’s go!” Katy put her finished drink down and we all stood up and made our way downstairs to the bar on the first level.

“So how you feeling?” Jessie asked, sipping at her vodka tonic. Her curly brown hair was tied up in a low side ponytail and cascaded over her shoulder. She looked fantastic in a tight white skirt, booties, and gold striped top.

It felt so great to be out, connecting with friends, and looking good. By now I was a good few drinks in and feeling great, and had some sudden drunken clarity about the whole Kyle situation. “Yes! The bastard isn’t waiting around for me. He’s with Kristen. So, I don’t wait around for him!” I announced in a drunken revelation. Jessie and Katy cheered.

Suddenly, a tall, dark man wearing a suit jacket and jeans turned to our direction, and smiled. “What’s the excitement, ladies?”

Giving him a big smile, Katy nudged me from behind and gave me a meaningful look. “We’re just celebrating being young and free!”

He laughed. “I can appreciate that.” Looking at me, he said “I take it you’re the cause of the celebration?
Can I buy you a drink?”

Seeing my hesitation, Katy poked me in the back again. “Why thank you.” I managed.

“Maddie.” I flashed him a smile.

“So, Maddie, celebrating being young and free? Tell me more.” Darius handed me my drink.

Thinking of what to say, I kept it light. “Broke up with someone, and we decided to have a girls’ night out.”

“So you’re single? That’s good.” He smiled at me again. Taking me by the hand, he said, “Let’s dance.” It had been months since I went out dancing, but I allowed him to lead me to the floor.

Hitting the dance floor, Darius held me close and started moving to the beat. I’m not a good dancer, but fortunately he was and I was able to follow along.

Holding me even closer, Darius whispered in my ear, “So, what are you doing after this?” Laughing, I avoided the question, which just seemed to encourage him. I had no intention of this going further than a few dances. The song changed, and Darius spun me around and held my hips against his, his hands on my lower back. I returned the grinding motion and clung to his neck as he rocked me around, laughing again. God it felt so good to get out.

Suddenly, the motion of dancing and the many, many drinks I had all night caught up to me, and I started to feel really nauseous, the kind when you need some water, now. I disentangled myself from his arms. “I’ll be right back.” I managed to mutter.

“I’ll wait for you.” Darius gave me a brief kiss on the cheek before turning back to the crowd near the bar.
Stumbling away, I covered my mouth and turned towards the bathroom. Standing there next to woman with long, jet-black hair, with no expression on his face at all, my eyes met Theo’s.

About the Author:
Riley May is a Minneapolis based writer of a popular fictional chick lit blog, a new series on leadership and business lessons, Leadership Fables, and has upcoming an upcoming fictional book in the works.

Riley spent several years in corporate American in various IT management related roles before turning to entrepreneurship and writing full time. She holds a BA from the University of Minnesota, a degree in Information Technology from Augsburg College, and an MBA from Bethel University. And about a zillion IT and business related certifications, but that’s just because she likes to study.