You are here: Home / Children and Young Adult Books / Matthias: The Ghost of Salvation Point by Jodi Auborn 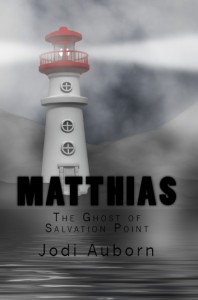 Ten-year-old Dylan is excited when his father inherits an old lighthouse and cottage in Maine. Dylan and his family get to live there all summer! He goes sailing on the bay, explores the small town down the road, and searches for a legendary pirate treasure that was said to be buried nearby.

After mysterious things start happening at the cottage, Dylan meets Matthias, a gruff lighthouse keeper who had died in a storm one hundred years before. A ghost! Dylan is startled to find Matthias living in his bedroom, but he is glad when they become friends. It’s the best summer ever!

Things change when they learn that the lighthouse is threatened by a greedy treasure hunter who also knows about the pirate legend. He will do whatever it takes to find the treasure…even kidnapping! As Dylan and Matthias team up to protect their home, they begin an adventure that changes Dylan’s life forever.

What Inspired You to Write Your Book?
“Matthias: The Ghost of Salvation Point,” was re-written from a short story that I wrote as a birthday gift for my dad when I was in college. Both the book and the original short story are about a family who moves into a haunted lighthouse. My dad loved lighthouses, and so did I, after my first trip to Cape Cod when I was 15. However, when I wrote the story, I hadn’t done any research on lighthouses, and it showed! Since I wanted accurate historical information in the book, I spent time researching lighthouses and the lives of 19th-century lighthouse keepers. It was an interesting topic to learn about, so I was also inspired by my research.

The original story was called “The Son of the Seafarer,” and I had attempted to write it as a serious “adult” story. Looking back at it years later, I realized that the writing was so bad that it was unintentionally humorous and melodramatic. When I decided to re-write it and turn it into a book in August 2013, I was shocked at how much work that it needed! That was when I knew that it just didn’t work as an adult story; it was meant to be a book for kids. So, I kept most of the characters but changed their occupations, ages, and relationships.

How Did You Come up With Your Characters?
I changed Dylan Flint, the 25-year-old main character from the first story, into a ten-year-old boy in the book. Dylan is a lot like me when I was growing up: quiet and introverted, prefers reading books to playing with kids his age, and has one hobby that he’s obsessed with: boat sailing. (Although my obsession was horses, not sailing.) As the smallest and least athletic kid in his class, he’s picked on and bullied in school, (like I often was), leaving just his dad (and Matthias, the ghost), as his only friends. As well as his talent for sailing, Dylan discovers that he has the ability to see and communicate with the ghost in his house, which makes him feel even more different than his classmates.

In the original story, the villains, Quint and Sleeter, were real-estate men who wanted to buy the lighthouse so that they could build a luxury resort on the land. However, that was too much like the plot of my first novel, “Stormwind of the North Country,” so I changed Sleeter into an obsessed treasure hunter who is convinced that a pirate’s treasure is buried near the lighthouse. Quint became his reluctant henchman.

Some parts of other character’s personalities are based on people I know, combined with my imagination. For instance, Matthias is based on a combination of my dad and maternal grandfather.

When I woke up, I thought that I was still out in the storm. The thunder boomed and crackled and rain pounded above my head, but I wasn’t struggling in the cold ocean anymore. Did it all really happen? Sleeter and Quint…the culvert…Thunder and the cliffs and the sinking motorboat…the whole day just seemed like a bad dream.

I moved my scratched-up arms, and felt warm and dry pajamas covering them. Who put these on me? I wondered, as I lay under the heavy blankets that were tucked up around my shoulders. I was back in my squeaky old bed with the sagging spot in the middle, and it never felt more comfortable. I was so tired.

I opened my eyes and looked across the room. Mom and Dad were there, watching me, Mom in the desk chair and Dad in the big leather one near my bed.

“Dylan?” Mom cried. “Oh, thank goodness!” She jumped up and rushed over to my bed, hugging me through my blankets. Her eyes were all red and puffy, like she’d been crying.

“You’ve been unconscious for awhile,” Dad said. “You have a bad concussion. We tried to take you to the emergency room, but found that there were trees down all over the roads.” He held up a baggie of melting ice cubes. “We’ve been icing your head. It’s kept the swelling down, but I bet you’re going to have quite an impressive bruise tomorrow.”

Mom sat beside me on my bed, frowning down at me. “You are in big trouble, young man,” she said. It sounded like she might start crying again. “Big trouble!”

“Yeah, I know. You’re shipping me back home first thing in the morning, right?”

Mom and Dad glanced at each other. “You just stay in bed and rest, for now,” Dad said. “We’ll discuss it in the morning. We have a lot to talk about.”

“Your father is right, young man. You need to think about what you just did today.”

Dad walked over and laid the ice back on my forehead. “It was the boom, wasn’t it?”

I nodded. “The boom hit me in the head. And then I was in the water. I couldn’t breathe.” I looked at Dad. “Somebody pulled me out. I thought it was you.”

Dad stared at me for a moment, and then looked at Mom. “Honey, I’d like to talk to him now…alone.”

“What’s this all about?”

Mom shrugged and walked out the door.

“Dylan!” Dad said in a low voice. He glanced at the door to make sure Mom was out of sight. “It was Matthias. I saw him. He had rescued you from the storm, and brought you back home. He was standing on the front porch with you in his arms. If it weren’t for him, you would’ve drowned.”

“Yes. I recognized him from the picture at the museum. He was wearing that old-fashioned uniform, and his skin was ice-cold. But the strangest thing was that, even though you had both been in the ocean and rain, his clothes and hair were dry.”

“He didn’t say a word. He just handed you to me, and when I looked toward him again, he was gone.”

“I didn’t tell her a thing. And neither will you…will you, Dylan?”

“You better not. You know how much that subject upsets your mother. And another thing! That was a rotten way for you to talk to Matthias today, after he was your pal all summer.”

“I believe that I overheard you telling him to ‘get lost,’ among other things. And after he had saved you from Sleeter and Quint today! I think you owe him an apology.”

“I know.” I nodded and closed my eyes. “Dad? Is Mom still taking me back to Grandma and Grandpa’s tomorrow? If she is, I don’t want to go.”

“I told you that we’d talk about that in the morning. Goodnight, Dylan.” He shut the door and left me alone in my dark room.

Matthias appeared after Dad left. As the lighthouse beam swung across the walls, I spotted him sitting at the desk and scribbling something with a frown.

“Are you writing in your logbook again?” I asked, turning on my bedside lamp.

“Yes. I’m writing about the dumb kid that I just had to rescue because he wouldn’t listen to what anyone told him.”

“Um…sorry…” I snuck a look at his angry face, and wished I hadn’t.

“Sorry? Sorry? You should be sorry, boy. And you should be ashamed of yourself. Your parents were frantic. You could’ve been killed.”

Matthias stood up and jabbed his finger at me. “You have a lot to learn about the sea, boy. You had no business being out there today. If you’re so arrogant that you think you can sail that little boat in a storm, then you don’t deserve to even have it.”

“Dylan, at one time, you told me that your boat was your most prized possession. What made it even more special was that your father built it for you. Now, tell me: was this any kind of a way to treat your prized possession? It might very well be destroyed on those rocks right now, and for what reason? All for nothing, that’s what. All because you acted like a spoiled and immature little brat who -”

“I know!” I wailed. “That’s the worst part of it. Dad built it for me, and now it’s probably wrecked. I feel bad enough about
it already. Don’t make me feel worse.”

He looked at the floor and began to speak in a softer voice. “I guess you already know that I lost my father to those very cliffs. I didn’t want to lose you, too.”

Matthias looked out the window, standing with his back to me. When he began talking, I could barely hear him above the rain. “It was in a storm a lot like this one. Our boat had crashed into the cliffs, and was starting to sink. My father had gotten tangled in the rigging, and was being pulled underwater. He drowned before I could free him.” He shuddered. “When I saw Sleeter’s boat go down, I felt like I was watching it happen all over again.”

I looked up at him when he didn’t answer me. For some reason, he looked very serious.

“Look, sonny, there’s something that I need to tell you. I might be leaving soon.”

“Leaving? What do you mean? You live here.”

“But this isn’t my home, Dylan. This earth hasn’t really been my home since I died. It’s made for you mortals, not us spirits.” He sighed. “You should be happy for me, sonny. I could cross over at any time. I just wanted to prepare you, in case I don’t get a chance to say goodbye.”

He pulled my blankets up around my shoulders. “Go to sleep. It’s been a long day today, and you need your rest. I have to get out to the lighthouse; there’s a lot of work to do tonight.”

“Will you…still be here tomorrow?”

“I might be. But I can’t promise you that. Whatever happens will be for the best.”

I watched as Matthias floated through the window and disappeared into the rain. I wondered if I’d see him again.

Matthias was just as much a part of my life here, as the lighthouse, Thunder, and Salvation Point, and even the buried
pirate treasure. It wouldn’t be the same without him.