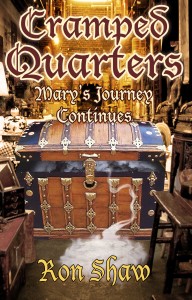 Do you believe in ghosts? Ron Shaw does, because one named Mary entered his life with a story from the crypt that had to be told, and Mary has plenty to divulge.

Shadows of Mary and Mr. Dickens dance in the flickering flame of a single candle, as her tale unfolds.

An evil guardian, a bat in the attic, an untrustworthy poet, and a wealthy young lawyer all drive Ron’s ghost as she strives to escape the shackles that bind her.

Internationally recognized author and host of The Ron Shaw Show on ArtistFirst Radio Network, Ron has done it again in this second volume of his acclaimed Cramped Quarters series, as he weaves fear, joy, and love into a story you won’t soon forget.

Don’t miss this one!

What Inspired You to Write Your Book?
This one, like MARY’S JOURNEY BEGINS, was inspired by Mary. It had to be written because this book is the continuation of ghost Mary’s life and her impending death.
Our ghost literally demanded that her full story be revealed.
I fear this isn’t the ending.

How Did You Come up With Your Characters?
The characters during her life were revealed by Mary within my dreams. These are her characters. My family and I are represented during the revelations she provided.
Mary is well familiar with our pets inside our home and outside of it.
It’s now apparent that her death was only the beginning of horrors to come.

It had been over two weeks since the third dream ended. Our Victorian ghost Mary has been silent.
No matter how much I wanted to know what happened to her after she had agreed to marry Paul White within the first few minutes of 1909, Mary was not ready to reveal this to me.
It was brutal to have three of the best four dreams I’ve ever experienced to end so quickly. There was no closure.
One good thing came from the end of the three nights filled with Mary’s life story. I had ample time to tell my wife Miss Donna and our daughter Amber what Mary had shown me. Unfortunately, my report was too short and seriously lacking.
The pressure was on now from me, Donna and Amber. We needed to know what happened to Mary.
How did she die? What was her life like in America as Mrs. Paul White? Was she a mother? Did she like living in America? Did she take her cats with her? What happened to Pip and Mr. C. Dickens? How in the world did she escape from the talons of Miss Meuller? There were so many questions like the one as to her chosen, married name in need of answers
Was I sure Mary would accept Paul’s name when they were married? Consideration had to be given to the facts she was named Miriam McBride by the Nuns at the Catholic Orphanage in the late 1800’s, and she was forced to answer to Mary by the evil Miss Meuller on January 1, 1900.
Donna and I remembered the story we were told by the nice lady who had sold us the trunk in the first place. She had related the information she and her husband had received from the antique store owner in Maine concerning the trunk and the ghost, Mary that inhabited it.
Neither of us wanted to believe the part as to how she had died. I think we had reason to be hopeful since many other aspects of Mary’s life were erroneously passed on.
As a matter of fact, Mary’s true story was a lot different than what was related to us by the kind lady who had the estate sale that weekend in Snellville, Georgia.
Donna astutely observed it was obvious Mary wanted her true story to be told. It’s precisely what Mary so far had done. She left us hanging from January 1, 1909 to this moment.
You could look upon those three night’s of vivid dreams of Mary as her setting the record straight.
But, she forgot a story needs three parts, beginning, middle, and end. We were apparently lacking much of the middle and practically, the entire end, with one exception, we knew she was a ghost existing within her antique trunk and stored in our carport.
I’m not ashamed to admit that each night after the last dream I prayed to God and to Mary to be there for me. I asked God to send her to me.