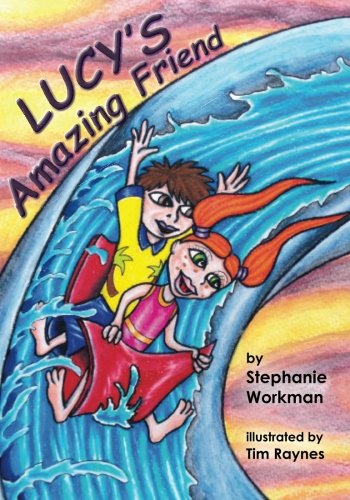 “Not being able to speak…is not the same as not having anything to say.” – Rosemary Crossley

Lucy doesn’t understand why the new boy in Miss Reed’s class doesn’t like her.

“I said hi and he ignored me,” she said.
“Lucy, that’s Daniel. He has autism,” Miss Miller responded.
“What’s autism?” asked Lucy.

From that moment on Lucy works to make friends with Daniel in this bright, upbeat book about autism. Once she succeeds, Lucy becomes determined that the other kids in the class learn to accept Daniel as well. With an estimated 1 in 68 children now falling somewhere on the autism spectrum, Lucy’s Amazing Friend is just the right book to help children understand that we are all different, and while those differences can be challenging, they also make us each special.

What Inspired You to Write Your Book?
Over a year ago I went to a reading at RiverRun Bookstore for Ellen Walker, author of Bringing Up John. She wrote a memoir about raising her son John, who lives with autism. It wasn’t until shortly before the reading I found out my husband Tim was friends with John in high school. There is a section about Tim in her book about the impact he made on John just by being his friend. Tim had no idea. To him, John was just John. That night at the reading Lucy’s Amazing Friend was born.

How Did You Come up With Your Characters?
Lucy was from previous children’s stories I’ve wrote but not yet published. I’ve been working on a series. I thought her personality was perfect for for this type of story. She is such a likable character I knew she would instantly want to form a friendship with Daniel.

Book Sample
Today at recess eight-year-old Lucy noticed a new kid drawing by himself. Curious, she walked over to him.

“Hi, I’m Lucy,” she said with a smile on her face. The boy ignored her and continued to draw.

Lucy looked down at his drawing and noticed how awesome it was.

“I really like your picture,” she said. The boy still paid no attention. Confused, Lucy walked away.

About the Author:
Stephanie is a graduate of Emerson College, receiving her BFA in Writing, Literature and Publishing. At fifteen she discovered her love for creative writing after a poem of hers was published in the 21st Century Poetry Journal. After that she began writing fiction, personal essays, and screenplays.

While at Emerson College she discovered a passion for writing children’s stories as well. Lucy’s Amazing Friend was inspired after meeting her husband’s high school friend who lives with autism. She lives in Exeter, NH with her husband Tim, their cat Sophia, and bird named Bird.