You are here: Home / Fiction / Fantasy / Lost by Charissa Dufour 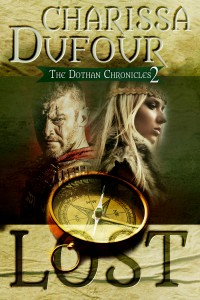 *This is a completed series*
King Wolfric Eberhand is enraged. His secret weapon—the one that will win him this war once and for all—has escaped, nearly killing his eldest son in the process. Now he must find a new way to destroy the Dothans.
Princess Bethan Kavadh, youngest daughter of the royal family of Dothan, is finally free. After spending months as a slave in King Wolfric’s home, and then later as his son’s fiancé, Bethany has escaped. Now, with the help of her rescuer Sir Erin Caldry, all she has to do is cross the great peninsula to return to the safety of her family.
Sir Erin Caldry has spent his life groveling to King Wolfric in the hopes of saving his sister, but when he learns that she doesn’t want to be saved, he finds himself without a purpose. Through a series of unfortunate events, Sir Caldry finds himself on the chopping block. Rather than be executed, Sir Caldry escapes, taking the captured princess with him.
Little did they realize, their journey to Dothan will be fraught with danger. Will Bethany find her way home? Will Sir Caldry find a new purpose? Or will they both become forever Lost?