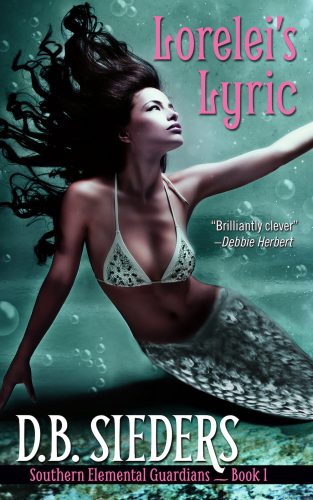 If Lorelei sings, someone will die.

Lorelei craves song as much as she needs the water. Both sustain her and fuel her mermaid powers.

But her mother has cursed her voice, and if Lorelei sings long enough, any mortal man within earshot will die.

Rockstar Vance Idol has been courting death for a while. He believes he killed his girlfriend. He can’t shake his alcoholism, and his attempts are ruining the music career he and his band have worked years to build.

Lorelei sang. Vance nearly died. Now, Lorelei has to make amends to the human with a death wish, without falling in love with him and losing her own immortality.

What Inspired You to Write Your Book?
I've always been a mythology nerd, and I find mermaid myths and legends so fascinating. They represent beauty and danger. They are known as deadly sirens who lure unwitting mortals to their deaths, but mermaids are also known as healers. I took those two aspects of the mermaid myth to create Lorelei and her Rhinemaiden sisters for this series.

How Did You Come up With Your Characters?
I was inspired by Lorelei of the Rhine and the legend of Melusine, two freshwater mermaid myths that I had not seen in paranormal and fantasy romance. Who would a mermaid want to save? A troubled rockstar with a death wish! Lorelei loves to sing but can't, Vance Idol can, but he's willing to throw it all away. Together, these two made the perfect pair in my imagination.

Book Sample
“I asked you nicely. Once. I won’t do it again.”

The woman didn’t flinch, but her gaze turned hard and held his without faltering. “You didn’t, Vance.”

“I didn’t what? By the way, what’s your name, sugar? Guess it must’ve slipped my mind since last night,” he added, smirking.

“I’m called Lorelei,” she said as she stood, forcing him to take a step back lest she knock him over. “And what you didn’t do was ask me nicely, but it doesn’t matter. You won’t find your phone, clothing, or the means to leave until I’m sure you’re fully healed.”

He maintained his glower but found himself at a bit of a loss. Though she was tall for a woman, he still outweighed her by at least fifty pounds of muscle. Most men he’d faced down during his time on the road would have cowered, but she clearly didn’t fear him.

Since he couldn’t persuade her by fear, he shifted tactics again, reverting to his preferred method of persuasion when faced with a difficult woman. It hadn’t failed him yet. He allowed his gaze to wander down her face to her full lips, and from there down along the slender column of her neck. Her audible swallow and the bob in her throat made him smirk with satisfaction. When his gaze fell to the swell of her breasts, he grew hard again and knew she’d read the heat in his gaze when it returned to her face.

He definitely saw heat in hers.

He moved past her, taking care to brush his skin against her bare arms, and sat down on the bed. He reclined and stretched his body, allowing the towel that covered his lower half to come loose. Plastering a smile on his face, one that charmed most women right out of their panties, he said, “Well if you really want to make sure I’m healed, Lorelei, I guess you’d best get on with your examination.”