You are here: Home / Fiction / Action & Adventure / King of the Mekong by Damian Magnay @damianmagnay 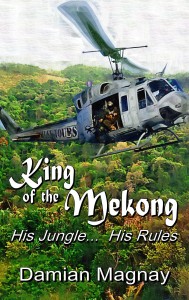 The adventure of a lifetime might just be their last.

Filled with curiosity about the jungles of Vietnam from his father’s war stories, Mick and a group of friends set out on an adventure trip near the Cambodian border countries. But the brochures had neglected to mention the bandit groups who plied their slave trade around the region. With most of the group taken captive Mick escapes and with the help of a local farmer he makes a dash for Ho Chi Minh City to find help. Only once there he discovers he is being hunted by the police as well.

With both sides closing in on him Mick soon realises he has become embroiled in a local drugs war where nobody is to be trusted.

King of The Mekong is a racing adventure through the jungles of Vietnam, a race against time and last desperate stand against a relentless enemy.

Targeted Age Group:: Anyone over 15

What Inspired You to Write Your Book?
Years of researching the Vietnam war and a trip to the area where I based the story. I toured around a few places of historical significance and thought, What if? ‘King of the Mekong’ was born shortly after.

How Did You Come up With Your Characters?
The characters have all changed since the first draft. I finished the book, then developed the characters a bit better. This way I knew what type of person they needed to be. I then imagined people I’d met over the years with a similar personality and used them as a template for my descriptions. The final names were generated randomly. There were several rewrites with this book. Character changes were responsible for about half of those rewrites.

About the Author:
Damian Magnay is a marine engineer and author of action/adventure novels. Originally from regional South Australia, he spent many years working in various parts of Australia as a Diesel mechanic before switching to marine and heading to sea. The long nights away were spent studying creative writing and novel writing. ‘King of the Mekong’ was started during one of these courses.

His spare time is spent either completing further studies in writing or penning another story.