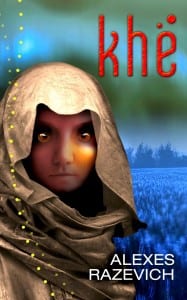 Khe, the first volume of the Khe’s World series, is the tale of a young alien on a distant planet who, to discover the truth of her world, must defy all that she believes.

Khe loves her simple life on a farming commune, until she discovers that her gift for pushing the crops is a death sentence. Fleeing across the wilderness, she makes her way to the city of Chimbalay, searching for the orindles who might save her. But Chimbalay has its own dangers. The Powers are there—the secret rulers who have chosen Khe to be the mother of a monstrous new race.

Neither man-in-space SF nor classical fantasy, Khe blends both while satisfying those wanting something new.

How is Writing In Your Genre Different from Others?
Speculative fiction has rules like any other genre, but the rules are slightly different because the world in which the story is set is not our world. We might have a world in which gravity doesn’t hold sway and everyone floats, but every scene has to have logic and make sense in a world in which beings float. In the case of Khe, because there are no human characters, I couldn’t use comparisons to earth objects. If she was eating a piece of fruit, it couldn’t be compared to a cross between an apple and coca-cola, because neither exists in her world. I settled for tastes–foods could be salty, tangy, spicy, etc. Khe also has spots on her neck that display her emotions, so the ramifications and etiquette of that had to be factored into the story. Part of the fun for me was this world-building. I hope all the work pays off in the reader believing completely that she or he is in Khe’s world.

What Advice Would You Give Aspiring Writers?
Read as much as you can–not only what you like, but books and genres you think you won’t like. Reading non-fiction is very useful for fiction writers. And of course, write, write, and write some more. When I was learning how to throw pots on the potters wheel, the common wisdom was that you didn’t even begin to get competent until you’d thrown a million pounds of clay. It may be true that writers need to write the first million words before they start to get good, too. Join a critique group–either online or face-to-face–and listen carefully to the criticisms. Fix the problems and write some more. Love what you do, or don’t do it.

Author Bio:
Alexes Razevich was born in New York and grew up in Orange County, California. She attended California State University San Francisco where she earned a degree in Creative Writing. After a successful career on the fringe of the electronics industry, including stints as director of marketing for a major trade show management company and as an editor for Electronic Engineering Times, she returned to her first love–fiction. She lives in Southern California with her husband and one of her two college-aged children. When she isn’t writing, she enjoys playing hockey and travel.

What Inspired You to Write Your Book?
Khe inspired me. She showed up one day, red-skinned and earless, and started telling me her story and insisting I write it down.