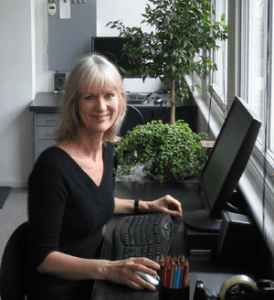 Spring sunshine poured in the open window, a thrush sang, a dove-grey feather zigzagged lazily through the air and settled on my desk. I picked it up and put it in the bin. I lined up my fountain pen with the notepad and the mat for my coffee, adjusted them a couple of times, reached for the phone and pressed redial. Before it began to ring, I replaced the receiver. Behind me the air stirred, the light shifted subtly and I heard a faint snort. When I turned, no one was there.

I’d half thought it might be next door’s cat, who visits occasionally in order to stare superciliously at me, before stalking off, tail in air. It would not surprise me if he’d worked out a way of adding snorts of derision to his repertoire.

I refocused on the matter in hand. All I had to do was pick up the phone, ring Claire’s number, and ask her out. She’d either say yes, or no. Yes would be good, no would at least provide closure. It would probably be no. She must be fifteen years younger than me, and was a great deal more attractive, as well as being remarkably nice. My hand hovered uncertainly over the phone.

A loud whooshing sound made me jump and twist round. Behind me, a human shape flickered for a moment and disappeared. A disembodied female voice muttered, “Damn.” As I gazed, whatever it was materialized dimly then solidified. A girl stood in my study, dressed in tight jeans and a vest top; between them, a gap showed her navel had a ring through it. Jutting over her shoulders and trailing to the carpet were a pair of grey wings.

I opened my mouth, but didn’t manage an articulate reply. She glanced around the room and back at me.

“Er, look, this is going to sound really stupid. I’m your guardian angel.”

All I could think of to say was, “Why are your wings grey?”

She extended one wing, craned her neck to see, plucked a feather and considered it. “Cause I’m a teenage angel, I s’pose. Like, you know, baby swans are grey to start with. Anyway, look, what I came here for is to say, you’ve got to make that call. You’ve got to ring Claire and tell her you want to come round, just for a minute, and you’ve got to do it now.”

“Why have I got a scruffy teenage angel in my study organizing my social life? When I’m perfectly capable of organizing it myself?”

The snort was louder this time. “Yeah, course you are. You’ve only spent twenty minutes NOT ringing her. And what do you mean, scruffy? These are Diesel jeans. They cost ninety quid. I bet your cardigan didn’t cost that much.”

I felt we were wandering off topic. “Why do I have to ring her now?”

She sighed theatrically. “It just is, okay? I wasn’t paying attention when they were going on about it, but take it from me, it’s a big deal.”

“So you’re saying, as my guardian angel, I should ring Claire, go round to her place and ask her out?”

She rolled her eyes. “Duh.”

“I’ve just thought, Claire’ll be going to London today. She does on Thursdays. Better if I call her tomorrow.”

The angel scowled. “Look, I didn’t actually ask to be here. It wasn’t my idea. They just said I had to. I didn’t get a choice. It’s not like they said, hey, Jezza, how d’you want to spend this morning? And I said, I really fancy talking to some sad git who’s too lame to chat someone up. Fix that up for me and it’ll make my day.” She stepped towards me. “Just do it! Pick up the fucking phone and ring her! NOW!”

One doesn’t expect an angel, even a teenage one, to use bad language, but I decided not to remonstrate with her. As fuses go, hers appeared on the short side. I pressed redial once more and listened to the ring tone. The angel picked at the skin round her fingernails, then started nibbling at it.

“She’s not answering … hello, Claire? It’s Marcus. Fine. Look, could I just pop round? I know, and I’m sorry to be a nuisance, but it’ll only take a minute … great. I’ll come straight away.”

Jezza insisted on coming with me. She said she wasn’t going to take the chance of me bottling out if left alone. So together, an unlikely couple, we walked to the cottage three doors along. Jezza said no one could see her except me, but she didn’t sound too certain about it. I suggested it would be helpful if she didn’t snort during my conversation with Claire.

Claire’s cottage is much the same as mine, but she’s grown roses up the walls and has window boxes with little conifers, cyclamen and trailing ivy. She opened the door before I got to it, and stood there smart in her London clothes, briefcase in hand, smiling brightly but evidently anxious to be off. Goodness, she’s gorgeous.

“Claire, so sorry to bother you. I must say, your garden looks terrific, I could do with some tips …”

Her eyebrows went up. I felt a finger prod me in the back.

“Gah! I want to ask if you’ll come out to dinner with me. Tonight – or tomorrow, if you like. Any day, really. I’ve been meaning to ask you for some time.”

Claire’s smile softened and she put her briefcase down. “Oh Marcus. You’d better come inside.”

As I turned to close the door, Jezza, standing in the garden, did a double thumbs up at me and vanished.

Of course, as I’d feared, the answer was no. But Claire’s too gentle a person to reject a chap and rush off to her busy day; she sat me down, made coffee and explained that she liked me a lot, but … Which is okay. We’ve been friends for five years, and my rash attempt to have a closer relationship wasn’t going to change that. After our talk, I walked with her to the station to wave her off on the next train.

Except there wasn’t one. All trains had been cancelled. The last London train, the one she should have been on, had crashed disastrously five minutes into its journey, while Claire, safely in her cottage, made me a cup of coffee.

Maybe one day I’ll find out why, as Jezza said, it was a big deal; why it was so important that Claire, out of all the passengers on the train, should survive; so important they sent me an angel. Also why she was my guardian angel, when it was Claire whose life she saved.

I sometimes find the odd grey feather round the place.

Probably from a pigeon.