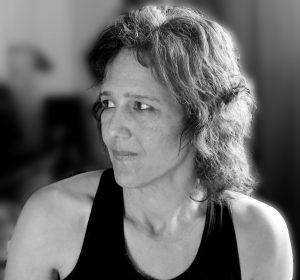 About Stacey E. Bryan:
Stacey was raised in the San Fernando Valley but born in San Francisco, where she left part of her heart. She has worked on a dude ranch, coached gymnastics, and captions for the hearing impaired. Her work has appeared in several literary magazines in New York and L.A., including Ginosko and The Rag. She is currently working on the sequel to her novel Day for Night. She lives in “beautiful downtown Burbank,” as Johnny Carson used to say, with her husband who is also a writer.

What inspires you to write?
Childhood inspired me to write. Knowing from a very young age that I was adopted, and being mixed race adopted into a black family made me very shy and self-scrutinizing. Climbing trees with my cat was preferable to playing with other kids. Reading, of course, was my escape. Coming home with seven to ten books from the library was like having a bag of gold or candy. Reading led to writing my own stuff later…and thus it began!

Tell us about your writing process.
Generally I write a chapter by chapter outline on paper the old-fashioned way. My hand cramps up because I’m not used to gripping a pen, and then later I can’t read my own writing. But I slog through it and then have a general idea, in each chapter, where I’m going. I already have characters and most of their relationships to others ready. Inside each chapter, it’s more free-styling. Like, I have the general outline, but once I go in, I improvise the rest and new stuff generally comes to me while I’m writing what I already planned out.

For Fiction Writers: Do you listen (or talk to) to your characters?
I don’t talk to my characters, but I guess I listen to them. Somewhere deep inside. You know how they say every person in your dream is only some kind of iteration of yourself in actuality? I think it’s the same for characters. Every character I write contains in small or large ways my personality, so I’m really just listening to those parts of myself talking as I unleash them.

What advice would you give other writers?
It’s a total cliché, but don’t let time slip by without keeping some kind of writing schedule. I stopped writing for years–not for any particular reason, but for myriad boring, everyday life reasons–and now I can’t get that time back. It could have been used to hone my craft, but instead I was paying bills and worrying about my 9 to 5. When they say write every day, they mean write every single day. Even if it is only a line, a paragraph, or a page.

How did you decide how to publish your books?
I queried agents for over a year with very little response. One person even wrote back that she liked my writing…but no go. So I went straight to publishers who accepted unagented authors. Self-publishing is perfectly acceptable to me as a choice, but it also takes some investment out of pocket. I also was starting from scratch with social media and needed a little hand holding from someone in the know, so the publisher has been a big help with that.

What do you think about the future of book publishing?
Publishing is already so completely different from when I was growing up. It’s definitely branching off from the “big” companies and agents and everything traditional to people just jumping head first into electronic publishing. The same way that movie and TV entertainment has been steadily gaining popularity through streaming and internet connections, the same is happening with publishing. It just seems to be becoming more “free-form”, more creative and individually controlled.

What genres do you write?: Fiction, paranormal comedy, and straight drama